I thought I was doing okay. When I graduated from Brown nineteen years ago, I was ready, as I wrote at the time, to "march wide-eyed into a world of darkness as a hero of the world of light." 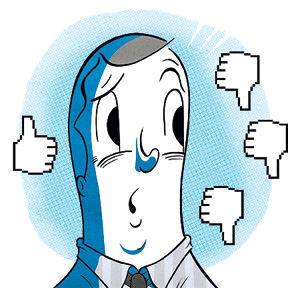 Experience has tempered some of that idealism, but I felt I was making my mark. I'd lost a campaign for Congress but I'd inspired people with my unflagging support of gay marriage (in Missouri!) and the rights of the underprivileged. I'd set up a human rights monitoring unit for the United Nations in Cambodia, written two books and scores of articles, led a national study of emergency preparedness after 9/11, built the leading Asia-Pacific next-generation leaders program, coordinated the U.S. government information war in Kosovo, been a loyal friend and kind to those around me.

In spite of myself, I was pleased when I learned that someone had created a Wikipedia page about me. Once in a while I'd peek. As I wrote articles and appeared in the media, I'd occasionally ask my assistant to add a link to the site. My wiki page became a narcissistic pleasure.

Then one day I found at the top of the page a picture of a scale and the words "A major contributor to this article appears to have a conflict of interest with its subject. It may require cleanup to comply with Wikipedia's content policies, particularly neutral point of view. Please discuss further on the talk page."

I clicked the link to the talk page, and there it was in stark letters: a debate among the "Wikipedia Administrators" over whether or not I was a notable person. Someone code-named Wikophile struck first: "Non-notable individual," he said, hardly mincing his words. "The subject is not a 'politician'; he is a minor individual in his purported field who soundly lost the only primary election in which he ever entered. Strong delete." Ouch.

Alansohn came to my defense. "Maybe we read different articles or found different search results," he said, "but this is clearly a leading scholar in the field and published author, whose work has been published in the New York Times, Foreign Affairs, the Christian Science Monitor, and the Boston Globe, which confers a strong degree of notability.... The person is clearly notable in full compliance with [Wikipedia standards] and passes the 'multiple non-trivial published works' standard with flying colors. Strong Keep." I loved Alansohn.

Mark Brouwer (he's listed in a quotable quotes web site so he must be someone) once said that "a man is only a leader when a follower stands beside him." Alansohn's inspired leadership was coming into question. I read on. Suddenly a plume of dust rose in the distance—the cavalry. Well maybe not the full cavalry, but Toptomcat saying the article "needs fixing, not deletion." The Bread seconded. Nae'blis opined that the article was "terrible," but that "the topic is worth keeping." Warhol13's support was the icing on the cake.

The verdict came in a small text box next to an image of a pencil and pad. "This article was nominated for deletion in the past. The result of the discussion was delete (citing copyright violations), but it was later rewritten (with copyright issues addressed)." My wiki page would live on.

I've tried to make my mark since graduation. Life, of course, is its own reward, and my ultimate gratification comes from the people I've helped and the lives I've touched. But Batman breathes down my neck these days. I'd better get working on my next twenty years.

Jamie Metzl is executive vice president of the Asia Society. Find him at http://en.wikipedia.org/wiki/Jamie_Metzl.

Reader Responses to Judgment at Wikipedia