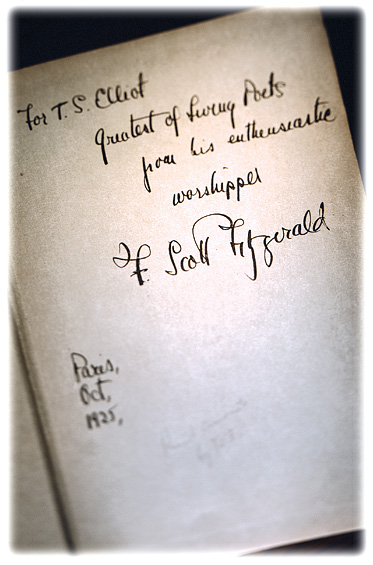 On April 19, 1925, Charles Scribner's Sons published F. Scott Fitzgerald's The Great Gatsby. Although it was quickly made into both a Broadway play and a Hollywood movie, the novel was not an immediate hit with either readers or critics. Sales of the first edition languished, and by the time Fitzgerald died in 1940 only 25,000 copies had been printed.

One early reader was T.S. Eliot. Fitzgerald sent him the copy pictured at right, inscribing it as "from his entheusiastic worshipper." (Fitzgerald was a notoriously poor speller.) Evidently, Eliot read the book, for he peppered its margins with pencil notations, some noting Fitzgerald's Americanisms.

Daniel Siegel '57, who began collecting rare books as a Brown student, donated Eliot's copy of The Great Gatsby to the John Hay Library as part of a major gift from his collections. To see the books in Siegel's gift lined up on a library cart is to look history in the face. Spenser's The Faerie Queene sits by Pascal's Pensées and the letters Darwin wrote from the Beagle. A first edition of De Revolutionibus Orbis, in which Copernicus proposed his "thought experiment" that the planets might revolve around the sun, shares shelf space with Galileo's direct observations of the same phenomenon in 1638, a discovery made possible by the invention of the telescope.

Reader Responses to Seeing is Believing