Because Sandra Allen, Will Litton, and Will Guzzardi—all '09— arewriters, they spent their senior year worrying how they'd find jobswhen they graduated. Because they sometimes perform improv comedytogether, their conversations about this tended to be loud and funny.One night, Allen recalls, "We were sitting around my apartment andyelling at each other, as we do, discussing the odd situation of beingtwenty-one, twenty-two, and having aspirations in the field ofwriting." 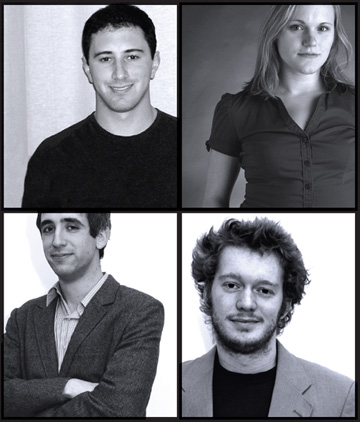 Courtesy Wags Revue
From top left: wags Dave Eichler, Sandra Allen, Will Litton, and Will Guzzardi.
At the time, book and magazine publishers were looking at shrinkingbottom lines, but Allen says she and her friends believed that goodwriting didn't have to shrink with them. It just needed to go on theInternet, "which is this big beautiful thing that enables really widedissemination of information, almost wholly free publishing."

At the time, Allen was taking an American civilization class calledDangerous Minds: Intellectuals and the Little Magazine, 1934–2008,taught by Mark Greif, who cofounded the online and print journal n+1."I asked the class to write prospectuses for the magazines they wishedthey could start," Greif says. "Well, Sandra went ahead and did it."

Allen, Litton, and Guzzardi enlisted their friend Dave Eichler '09 tohelp them design a website, and they published the first issue of theironline-only literary quarterly in time for graduation last year. Theycalled it Wag's Revue, playing off the meaning of wag as a funny and good-natured scold, and also using it as a mash-up of the words web and mag.

Now in its fourth issue, Wag's Revue has won accolades from the Village Voice and Poets & Writers.It has run interviews with, and writing by, such writers as DavidRakoff, George Saunders, T.C. Boyle, Dave Eggers, and Brian Evenson, aprofessor of literary arts at Brown. It also tried to be a launchingpad for new writers, Guzzardi says: "We don't want to be just peoplewho have already 'made it.' "

Each issue includes interviews, poems, essays, and fiction. The writingis clever and witty, while the spare design mimics the printed page,allowing readers to turn the "pages" and navigate through the entiremagazine by clicking on digital thumbnails of each spread. Issues runabout 100 pages.

The bookish layout is intended to give readers of print magazines afamiliar experience. A well-designed magazine should have "thatbulkiness, the weight, that sense of 'I'm home' you get when you openup your New Yorker,"says Allen. Much web publishing doesn't have that, however. "I don'tcare how good the essay is. If you publish it in a big long snake allthe way down the page, and you do a 1-2-3 link down at the bottom, andyou kind of splat some photos here and there, maybe some ads, it's nolonger going to seem special."

At the same time, Wag's Revue takes advantage of some ofthe Internet's unique characteristics to provide a deeper readingexperience. Poems by Cuban poet Rogelio Saunders, for example, areaccompanied by poet Sara Gilmore's "Stir Fry Translations." Click on"English" or "Spanish" to read the poems in their entirety or, as theeditor's note explains, "Mouse over the poem to generate a 'stir-fry,'a combination of English and Spanish phrases composed at once bySaunders, Gilmore, yourself, and your computer."

The editors are unpaid, and they recognize that they can do this as alabor of love for only so long. "Part of the beauty of being the agethat we are, and the place in life that we're all at, is that it's okayto spend an insane amount of time on this and not reap any financialreward," says Allen, who is now studying nonfiction writing at theUniversity of Iowa. Guzzardi, in contrast, is getting a view of thefinancial possibilities of Internet journalism at the Huffington Post, where he's an associate editor. In matters of scale, he says, the two publications are worlds apart.

Wag's Revue is a rejoinder to complaints that no one readsanymore. "The fact of the matter is, people read much more now thanthey used to," Guzzardi says. "People take in more information thanthey ever have." All that's changed is the format. "Ultimately, whatmatters most to us is that you can read this stuff and enjoy readingit."

Reader Responses to Who Needs Paper?