The earth is on the move. Or so it seemed this winter, when earthquakesravaged Haiti, Chile, and Turkey. The greatest devastation occurredaround 5 o'clock on the afternoon of January 12, when the worst quaketo hit the Caribbean in at least two centuries struck just southwest ofHaiti's capital, Port-au-Prince. So far, it has killed roughly 230,000people. The earthquake was a reminder of nature's lack of pity. InHaiti some 8.7 million people live in an area the size of Maryland.Many of these people are concentrated in Port-au-Prince, which wasleveled by the quake. The country is by any measure, and by aconsiderable margin, the poorest in the western hemisphere. Eightypercent of the population is considered poor. Alpert Medical Schoolprofessor of medicine Timothy Flanigan has twice volunteered to providemedical care in Haiti, once with the Haitian Project, which runs aschool on the outskirts of Port-au-Prince and is headed by PatrickMoynihan '87. "It's hard for us to comprehend the challenges of caringfor thousands of wounded in a country as poor and damaged as Haiti,"Flanigan told Today at Brownin January. "Haiti is worse off than most other struggling countriesbecause its infrastructure has been poor for so many years." 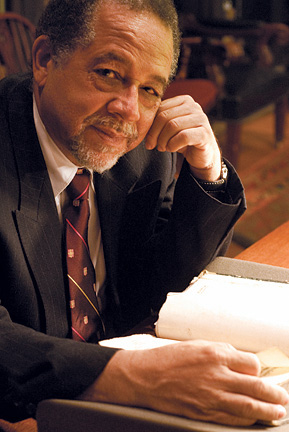 Mary Beth Meehan
PatrickTardieu working at the John Carter Brown Library. Tardieu has been oncampus since the earthquake trying to organize the recovery of some ofthe country's most precious historical records. "How can you build anation," he asks, "if you don't protect that, if you don't have yourmemory?"
Inthe days after the earthquake hit, Brown, with its long tradition ofpublic service, scrambled to figure out how best to help. Cate Oswald'04, the program manager for psychosocial support and mental healthservices in Haiti for Partners in Health—cofounded by Dartmouthpresident Jim Yong Kim '82—set about organizing the logistics ofkeeping the group's ten hospitals in the country running, even as theyquickly filled with seriously injured Haitians. "Tonight," she reportedvia e-mail on January 14, "as I was leaving the U.N. headquarters, Idrove by the national plaza and national palace (destroyed) and thereare thousands of people everywhere, sleeping outside. We're stillfeeling aftershocks, so no one wants to go back inside homes, and manypeople can't go back into their homes."

Three days later President Ruth Simmons sent out an e-mail to theBrown community announcing the formation of a committee "to coordinateBrown's relief efforts and to make recommendations about furthermeasures the University community can undertake." She advised people toprovide support to relief organizations, saying, "Humanitarian reliefagencies are unanimous in pointing out that giving money is the singlemost effective course of action."

Simmons' committee did what academics do best: they provided contextand they taught. Professor Emeritus of Geological Sciences Terry Tullisspoke to reporters, comparing the earthquakes in Haiti and in Chile(which, despite causing less damage, Tullis said, was 500 timesstronger than the one in Haiti). In February, the campus Haiticommittee organized an afternoon teach-in (some students had neverheard of the phrase) that featured an exhibition of Haitian art and arange of scholars who spoke about Haitian history, politics, andculture. A pair of Brown doctors just back from the country talkedabout their time there. Similarly, a Haitian film festival was plannedfor March, with all proceeds going to Partners in Health, which haslong been working in the country.

After the students returned to campus from winter break, an eveningvigil was held to honor the Haitian dead and express support and faithfor those struggling to survive. Visiting Lecturer in Latin AmericanStudies Patrick Sylvain, a Haitian American poet, recited an excerptfrom his poem "Ports of Sorrow," which was inspired partly by theearthquake:

With sadistic laughter. I feel burdened by death

Losses and corpses swarming in my chest.

Students rallied to create fund-raisers, and the range wasimpressive. There were bake sales and brown-bag concerts. A cappellagroups sang for money. Yoga practitioners exhorted one another to puttheir discipline into practice by showing their compassion and givinggenerously. The women's basketball team sponsored a"free-throw-a-thon": contributors pledged a dollar for each free throwthat team members sank. By the end of February, campus groups hadraised more than $25,000 for relief organizations. 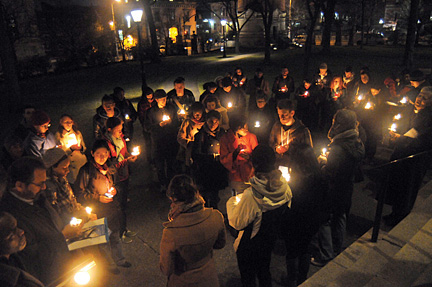 Frank Mullin
Chaplainof the University Janet Cooper Nelson speaks on January 27 at a vigilfor Haiti held on the College Green. "It's a statement of conscience,"Cooper Nelson said. "We're not just the people studying behind thegates. We have a moral obligation."
Ted Widmer, director of the John Carter Brown Library, invited hiscolleague Patrick Tardieu, the curator of Haiti's oldest library, touse the JCB as his base while he figured out a way to save some of thecountry's most valued historical records. As the chief conservator ofHaiti's Bibliothéque Hatienne des Péres du Saint Esprit, Tardieu isresponsible everything from records of human slave sales to governmentrecords from the colonial period to a major collection of historicalbooks about the country. His immediate goal was to get help to removethe books from the damaged library and box them safely away as thelibrary is rebuilt. Although the first responsibility of rescuers wasto save lives, Tardieu told the Chronicle of Higher Education,"A cultural library like the Bibliothéque can be interpreted as part ofthe personality of the people of Haiti. How can you build a nation ifyou don't protect that, if you don't have your memory?"

Meanwhile, on the ground in Haiti the people were in dire need ofmedical care. Rick Perera '87, emergency media officer for CARE inHaiti, posted reports from the country on a CARE blog. "You can seedesperation in the eyes of children," he wrote on January 19, "some ofwhom have been separated from their families and have no way of knowingif their parents are alive."

The people most in demand after the earthquake were doctors, andamong the first wave to arrive were four from the Alpert MedicalSchool. Professor of Orthopaedics Christopher Born is a member of theU.S. Department of Homeland Security's International Medical SurgicalResponse Team, which sent a medical team of sixty to Haiti immediatelyafter the earthquake. 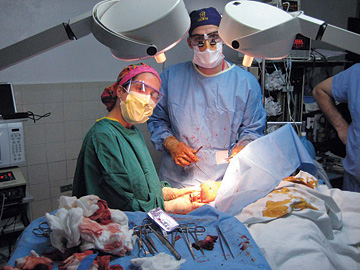 Robert Sheridan/Partners In Health
Surgeons Helena Taylor and Stephen Sullivan in an operating room in Haiti.
In the Providence Journal, Born marveled at the equanimityof the people he was treating: "It was hard to tell whether they werejust shocked and depressed, whether it was their faith, whether they'vebeen under duress for so long ... they don't have any expectations.Even the kids, the kids were unbelievable—cooperative, didn't cry."

Stephen Sullivan and Helena Taylor, assistant professors of surgerywho are also husband and wife, went to Haiti for Partners in Health, asdid assistant professor of emergency medicine Sachita Shah. Sullivanand Taylor were part of a team of surgeons to perform 122 operationsover nine days.

"If there is a silver lining in this event," Sullivan and Taylor later wrote in the New England Journal of Medicine,it is that surgical care in Haiti will never be the same. Hundreds ofnurses, surgeons, and anesthesiologists have been introduced to acountry in need.... Haiti will not be forgotten."

For some people associated with Brown, the devastation was deeplypersonal. "My cousin Maxo has died," wrote the award-winning HaitianAmerican novelist Edwidge Danticat '93 MFA in the New Yorker less than a month after the earthquake hit. "The house that I called home during my visits to Haiti collapsed on top of him."

Two days after the earthquake, Danticat wrote, she was half-expectingher cousin, whom she described as "a hustler," to pop up behindAnderson Cooper on CNN. Danticat, the parent of baby, was frustratedthat she couldn't be in Haiti to help the injured and homeless membersof her family. But when she expressed this frustration to one of hercousins who had been sleeping in bushes near dead bodies, she foundherself being comforted by the cousin:

If you have helped out in the aftermath of the Haitian earthquake,or are working to help Haiti recover now, we'd like to hear your story.Contact us at alumni_magazine@brown.edu or post comments at the end ofthis article online at brownalumnimagazine.com.

Reader Responses to Burdened by Death