A Home for Medicine

With a loud and cathartic blow, Ruth Simmons and med school dean Ed Wing launched construction on April 26 of a new off-campus home for the Warren Alpert Medical School. After speeches from local and state VIPs, Simmons and Wing picked up sledgehammers and took aim at a giant black X on a first-floor wall, thus beginning the gutting and rehabbing of a former industrial building in Providence's Jewelry District. 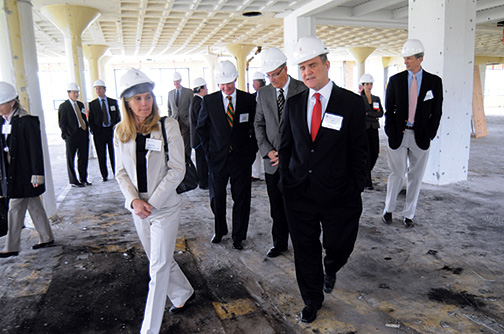 Frank Mullin
Dean of Medicine & Biological Sciences Edward Wing leads a tour throught the future home of the Warren Alpert Medical School.  The former industrial building in Providence's Jewelry District should be ready in August 2011.
"I can hardly believe that this day has arrived, finally," Simmons said earlier to an audience of donors, administrators, medical students, and local, state, and union officials.

By renovating the 135,000-square-foot 1928 building on Richmond Street, the former home of costume-jewelry manufacturer Brier, Brown will at last have a distinctive medical school headquarters near many of its teaching hospitals. The space will allow the school to expand entering classes from 96 to 120 students, and will anchor development in a Providence neighborhood that has been identified as the locus of a local "knowledge economy."

The building will allow the school to adopt the "academy" learning model that has been successful at medical schools at such places as Harvard and Johns Hopkins, in which entering classes are randomly divided into groups of forty, facilitating academic and social collaboration. In addition to large and technologically sophisticated classrooms, the new building will house a library, two auditoriums, and a clinical-simulation center—an outpatient-care facility where students, under the supervision of doctors from nearby hospitals, can have greater patient contact. The building's exterior will be 70 percent glass, allowing it to become, in Wing's words, "a shining beacon of our commitment to education."

Simmons explained that, in a meeting she held shortly after becoming Brown's president, medical students told her, "We need a home." Until now, medical students have worked in various locations on campus, far enough removed from the city's teaching hospitals to serve as an obstacle to frequent interaction between campus-based first-year medical students and hospital-based upperclassmen and faculty. Today many classes, said Thomas Anderson '13 MD at the event, "are in random rooms in a basement, or in rooms not really designed for that purpose."

Biotechnology companies have also begun to crop up in the Jewelry District, and Governor Donald Carcieri '65 noted at the April groundbreaking that he is trying to persuade the state legislature to help fund a new nearby nursing school that would be affiliated with two other colleges in the state. Speaking of the medical school's move to the neighborhood, Carcieri noted, "People are going to look back twenty years from now and say that was one of those pivotal moments for our city and our state." Similarly, Mayor David Cicilline '83 added, "This is incredibly important to the long-term health of the economy of the city and the state."

Michael Sabitoni, president of the Rhode Island Building and Construction Trades Council, thanked Brown officials for "not only continuing to build when many of its peer institutions are backing off," but using Rhode Island-based labor from a sector whose unemployment rate has been as high as 50 percent. He also noted that the project would be part of the Building Futures program, in which workers from Providence's poorest neighborhoods would be trained to contribute at least 15 percent of the construction work hours, providing jobs and training that would otherwise be unavailable.

"From my perspective," Governor Carcieri said, "higher education in Rhode Island is a growth industry."

Reader Responses to A Home for Medicine