As a child, Merrill Stubbs resisted cooking. Although her mother, a natural cook, tried to woo her into the kitchen, Stubbs preferred to read about food. "I loved the cooking scenes in the Little House series," she says, "especially the part about blowing up the pig's bladder." A comparative literature concentrator at Brown, she spent her junior year in Italy, where she enrolled in a one-day cooking class in Padua. "It was just basic homemade pasta and sauces," she says. That was all it took to get her serious about cooking. 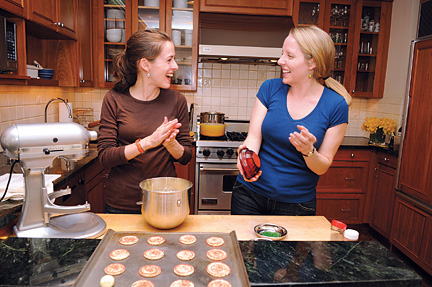 Sarah Shatz
Merrill Stubbs, right, and Amanda Hesser have fun baking and blogging together.
She enrolled in more cooking classes after returning to the United States, and became her apartment's de facto cook senior year, making chicken cacciatore and olive bread. "One of my roommates was vegetarian," she says, "so we ate a lot of tofu with brown rice—a lot of half-Asian things."

Still, Stubbs resisted the idea that food might be her calling. After Brown, she took a teaching job in New York City, where she was lonely and miserable. At a friend's urging she withdrew her savings, moved to London, and enrolled at Cordon Bleu, taking classes six days a week. She thrived. "You were tested the first day and every day after, but it was a really invigorating kind of stress," she recalls. Her classmates came from all over the world, and she loved the intense community they forged.

Now Stubbs has combined her passion for cooking with the burgeoning online world of social networking. Last September, she and New York Times food editor Amanda Hesser launched food52.com, where the two blog and conduct weekly recipe competitions that they and their 6,000-plus members judge. After a year the winning recipes will be collected in a cookbook (thus the site's name, food52).

The recipes on the site are personal, international, and very sophisticated. You won't find Cool Whip or Campbell's soup listed as ingredients. That's by design, says Stubbs. She and Hesser describe food52 as "crowd-sourced and curated," which means the content is user-generated but closely edited for quality. When you type "beets" into the search engine, winning recipes float to the top of your results: French peasant beets with chard and boucheron goat cheese is one of Stubbs's favorites. "You have to set the bar high at the start," she says, pointing out that once-gourmet companies like Starbucks and Williams Sonoma (which advertises on the site) are now seen as mainstream.

Stubbs believes that some of the best food being created today is the work of individual cooks, not celebrity chefs or test kitchens. Last October, Chris Kimball, the bow-tied editor of Cook's Illustrated, griped on his blog about food wikis, and challenged food52 to a showdown. He later withdrew the post, but Stubbs and Hesser took him up on it anyway. After negotiating the rules all winter, this spring they encouraged their members to submit recipes for roasted pork shoulder and chewy sugar cookies. The winning recipes will go head-to-head with Cook's test kitchen–proven best recipes on Slate sometime this May, and the public will vote.

As the clock ticked this April, Stubbs and Hesser tweeted to their members: just eight hours left to submit the recipe "that will make Chris Kimball's bow tie spin."

Check out some of Merrill Stubbs's favorite recipes: