Message from National Public Radio national political correspondent Mara Liasson '77 to the Democratic Party: you're in serious trouble, and here's what I think you'll have to do to get out of it. 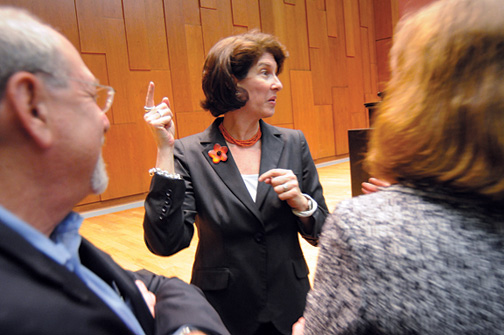 Frank Mullin
Mara Liasson predicted a grim future for the Democrats.
Liasson, who delivered the Casey Shearer Memorial Lecture on campus April 8, said the party of Clinton and Roosevelt stands to get a good drubbing this November in the Congressional elections. "In general, I would say the outlook is positive for Republicans, but grim for Democrats—but a little less grim because they have health care," Liasson said, referring to the passage of health care reform earlier this year.

Liasson, who has worked for NPR for more than twenty years, including a stint covering the Clinton administration, cited a number of factors working against the Democrats: an unemployment rate hovering around 10 percent, historically low approval ratings for the current Democratic-controlled Congress, and what she described as the "virulent anti-incumbent fever" raging across the United States. She said Democrats know their outlook is bleak, and they would be "thrilled" if they lost only four to six Senate seats and fewer than twenty-five seats in the House of Representatives.

The dismal prognosis comes despite the enactment of major health care reform. During the year it took Obama to get the legislation through Congress, there arose "a real grass roots rebellion" against the bill, Liasson said, while Republicans proved themselves a "disciplined, determined minority in Congress." Obama was unable to deliver on his promise to bring a new bipartisan tone to Washington, which has left many of his supporters disillusioned. Liasson said it was still unclear if public support for the health care reforms would increase by November.

At this point, she said, "Both parties are completely convinced that the politics of health care are good for them." Liasson also pointed out that this is a particularly important election year, because whatever party controls the governors' mansions and state legislatures will also control the upcoming redistricting process.

Regardless of the election results, Liasson said Obama will have to tackle the federal budget deficit. "The Democrats and the Republicans and the public are right now in denial about what we have to do to deal with this debt," she said. "There are huge, politically wrenching things that are going to have to happen if this problem is going to be solved."

Liasson believes the President will have to implement cuts to Social Security and Medicare while also raising taxes on the middle class. "President Obama is going to have to break his promise not to raise taxes on people earning under $250,000," she said. She speculated that there would be a tax on consumption while taxes on income would be cut: "That's going to have to be the grand bargain."