Take These Books to the Beach

Just Like Me, Only Better by Carol Snow '87 (Penguin/Berkeley).

The surprising thing about genre fiction is how often it surpasses its genre roots, which may be why it can make for such satisfying beach reading. 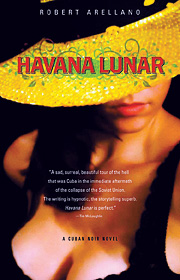 Take Robert Arellano's noir novel, Havana Lunar, a grisly 200-page thriller set in Cuba, in which an idealistic young doctor falls for a teenage hooker, only to learn that her abusive pimp has been murdered and that he, the doc, is the prime suspect. Havana Lunar was a finalist for this spring's Edgar awards, the Pulitzers for mystery novels.

Arellano, who's Cuban American, began researching Havana Lunar when he visited his homeland as a Brown student. He has returned to the island six times since. The novel is set amid the surreal details of Cuba's Special Period. Dependent on Soviet oil for transportation, farming, and trade, the Cuban economy collapsed after the fall of the Soviet Union in 1991, ushering in a prolonged period of poverty. In Arellano's Havana, meat, coffee, and petrol are scarce, and hunger is widespread. It's a surreal world, in which the sudden availability of black-market flour prompts rumors that the government has contaminated it with ground glass. That in turn, prompts another rumor: that the government is spreading the ground-glass rumor to shut down the black market. Truth may be the scarcest commodity of all in this house of mirrors.

The second scarcest commodity may be freedom. The Reforma Urbana has "reallocated" Dr. Rodriguez's house, moving in a family from the provinces and the block captain for the Comité de Defensa de la Revolución, who keeps tabs on the neighbors. Rodriguez has set up a clinic in the basement, where he treats patients without benefit of medication; neither morphine nor aspirin is available. It's there that he meets the jinetera, the streetwalker, when she comes in asking to be tested for HIV.

Carol Snow's light romance, Just Like Me, Only Better, takes its inspiration from an equally surreal source that's closer to home: the Disney Channel. Her protagonist, Veronica Czaplicki, is a substitute teacher whose husband has just dumped her and their young son for an older and better-heeled woman. Veronica is broke, but she has one big asset: she looks strikingly like hot new actress Haley Rush—a star of the Betwixt channel and an idol of tweens across America.

Haley, it turns out, is sabotaging her career, binging on candy, coming to work hung-over and throwing tantrums in public. When her manager sees Veronica in a restaurant, he concocts a solution to the problem. He hires Veronica to pose as Haley, handling media photo ops that are crafted to salvage the star's reputation.

Predictably, the plan backfires. But Veronica gets a good haircut out of the gig, and it pays a lot better than substitute teaching. Plus she gets to date Haley's ex-boyfriend, B-list actor Brady Ellis, around whom she acts like a nitwit.

The novel may be total fluff, but Snow's eye for detail and irony make for a fun read. Montana-born Haley wears pink cowboy boots, guzzles blue Gatorade spiked with vodka, and has decorated her oversize tract house with antlers and bent-willow and log furniture. If you live with tweens and have spent too much time watching Miley Cyrus morph into Hannah Montana on Disney, you'll either laugh or cry reading Just Like Me, Only Better.

Reader Responses to Take These Books to the Beach