When he was a senior at Brown, Donald Ariel took a graduate-level class in ancient coins in which the professor assigned cataloguing a coin collection at Wheaton College in nearby Norton, Massachusetts. The collection consisted of 250 coins, all of them minted during the time of ancient Greece or Rome. 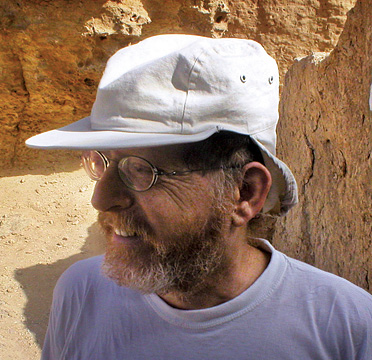 Courtesy Donald Ariel
Ariel at a dig in Israel.
"We were told to do the full Monty," Ariel says. "Learn how to organize the collection, how to identify the coins, how to find the relevant reference material, and how to write up a catalog describing each one and its significance." Ariel, who concentrated in ancient Mediterranean civilization, describes this as a watershed moment in his college education, his first chance at touching archaeological artifacts.

Ariel now lives in Jerusalem, where he oversees Israel's national coin collection for the Antiquities Authority, a quasi-governmental agency that directs archaeological digs in the country and helps preserve the findings. The collection holds a million coins, some dating as far back as the sixth century B.C. Ariel is a U.S. citizen, but he moved to Israel in 1976 and earned a master's in archaeology from Hebrew University. (More recently, he earned a PhD in the subject from Tel Aviv University.)

Coins, Ariel says, are a rich repository of knowledge about the civilization that mints them. With an image of the current leader on their obverse side, they are easily datable and can even help date the structures where they're unearthed. Ariel says that Israel's collection of coins is remarkable not because of its size—collections in New York and Paris are larger—but because each is linked to a record of where and when it was discovered. Having such reliable records of how deep the coin lay buried or where it was in relation to other artifacts helps create a more detailed and richer understanding of the archaeological site.

In August, near the border with Lebanon, researchers found a 2,200-year-old gold coin from the Ptolemaic era, the most valuable coin ever found in Israel. It bears the image of Queen Arsinoe II Philadelphus, who ruled over Egypt in the early third century B.C. and who has the distinction of having married her brother. (Philadelphoi means brother-loving in Greek.)

Ariel himself does not keep a personal coin collection. But he does go on digs every summer and still enjoys keeping in physical touch with antiquity through the objects the Authority has in its collection. "I chose to come to Israel because I can directly connect to the objects I'm working on," he says. "I can go to the sites that I'm studying by getting in the car and visiting."