A Man of Integrity

The subject of what may have been Alva Way's favorite aphorism was peacocks. Today's peacock, he liked to say, is tomorrow's feather duster. Way, a former Brown chancellor and longtime fellow and trustee, was known as much for his aversion to preening as for his considerable accomplishments in business and finance. Integrity is the word his friends and family most associated with him. Way died September 15 at his home in Connecticut. 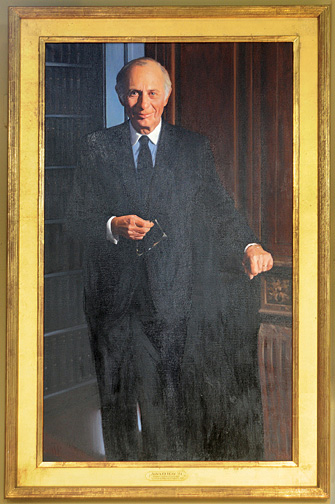 Vartan Gregorian, Brown's president during the nine years Way served as chancellor, once said that his own accomplishments were as much Way's as his. "Al," he said at Way's memorial service in Sayles Hall in October, "was one of those rare individuals who, while accepting life's limitations, still fought for both the possible and the impossible with equal determination."

According to former chancellor Artemis Joukowsky '55, who was Way's assistant chancellor at the time, Way and Gregorian had personalities and areas of expertise that were ideally suited to overseeing the University. While Gregorian was the visionary public face of Brown, Way was the seasoned corporate adviser, the man with "practical, down-to-earth views of business" that became particularly useful during the Campaign for a Rising Generation, which raised $534 million. The campaign was, at the time, the most successful fund-raising campaign in Brown's history. "Where Alva Way stepped," Gregorian said, "grace, goodness, love, loyalty, and integrity walked right by his side."

Born in Schenectady, New York, Way was a U.S. Army veteran. After graduating from Brown, he joined General Electric, where he worked in finance positions in Latin America and Europe, as well as in the United States. In 1973 he became GE's chief financial officer and helped establish GE Capital. "That was probably his most impressive accomplishment in the business world," Joukowsky says. "It was a huge organization, and his was a major responsibility."

Way's service to Brown began in 1978, when he was appointed a trustee of the Corporation. He served as a trustee for eleven years and later as a fellow for eleven more. In 1988 he was named the University's seventeenth chancellor, and was crucial to the success of the Campaign for the Rising Generation. "For those of us at Brown who benefited so greatly from his devotion and generosity," President Ruth Simmons said at Way's memorial service, "he was an example of how to translate and enlarge professional knowledge and attainment into a broader example of a life of usefulness and reputation.... We will miss the wonderful and principled voice that he always raised."

Reader Responses to A Man of Integrity