The Greek playwright Euripides once said, "To a father growing old, nothing is dearer than a daughter." Cornelius Madera certainly agrees. Three times. 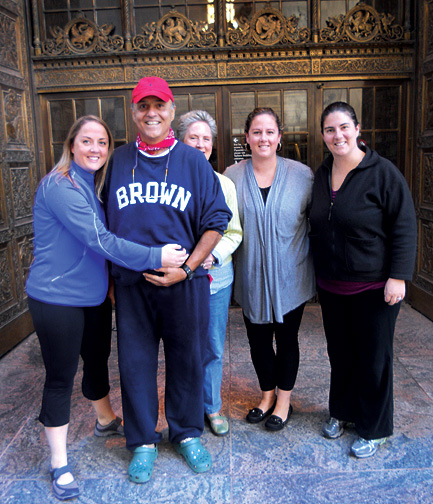 In March 2010, while overcoming what he believed to be cold symptoms, Madera was diagnosed with cholangiocarcinoma, a very rare form of cancer that afflicts the bile duct, which carries bile produced by the liver to the intestine. Two Boston-based specialists gave Madera a grim prognosis: even if radiation and chemotherapy treatments worked, he had, at most, seven to nine months to live.

Madera, a real estate developer and golfer who lives in Osterville, Massachusetts, responded: "I just don't accept this. No way." He thought of his three daughters and decided, "I'm not going to leave them this way."

Madera's daughter Caitlin Madera Fawcett '99 also refused to accept the diagnosis. An internist at Boston's Beth Israel Deaconess Medical Center, she began extensive research and found that the Mayo Clinic in Rochester, Minnesota, had the best program in the country for treating bile-duct cancer. So Cornelius flew there in April for tests.

A biopsy of the lymph nodes around the tumor showed they were cancer-free, which gave everyone hope. But it also meant they had to act quickly. Cornelius registered for the living-donor program and waited for a matching liver. A living-liver transplant allows surgeons to remove the diseased portion of a patient's liver and replace it with a percentage of healthy liver from a matched donor. The donor's liver regenerates over time and, in the best of cases, the patient's life is saved. Yet the surgery is not without risk for the donor. Infection is possible, and even death is not out of the question.

Enter Madera's youngest daughter, Morgan Madera '03, a marketing manager for an architecture and design firm in Cambridge, Massachusetts. When Morgan heard about the living-donor program, she got tested without her father's knowledge. She was a perfect match.

When Morgan told her father she was going to be his donor, he broke down and said, "Are you sure you want to do this? It's fraught with risks. I'll wait."

"It wasn't even a decision," Morgan now says. "I never once sat and thought maybe I shouldn't do this. I was just like, 'Bring it on and let's do it.' I was just so grateful it could be done."

In September she donated 67 percent of her liver to her father. Three months later her liver has regenerated and grown to normal size, and she is slowly returning to her old work and exercise schedule. For his part, Cornelius was declared cancer-free a month after his surgery and told to watch his diet. He can now resume golfing whenever he wishes.

Meghan Madera Bent '98, Madera's other daughter, says her role during the crisis was more psychological. She kept up the family's spirits. "It's easier for the patient and harder for the family to cope," she says, "because you feel as though you have no control over the situation." Her family agrees that her jokes and positive attitude were instrumental in keeping them hopeful and focused.

The sisters' intervention was so successful that Caitlin, the Boston internist, is considering opening a consulting office for people who need help with medical research after they've been given an unfavorable diagnosis.

The greatest lesson, Cornelius says , "Patients should never give up hope. Don't quit, because good things can happen."