Power of the Powerless

Looking back on his days at Brown, Brooklyn social activist Mark Winston Griffith admits that he just might have spent a little too much time organizing and protesting. He marched in numerous anti-apartheid protests. He was a leader of the campaign to increase the diversity of Brown's faculty that culminated in the student takeover of the John Carter Brown Library. 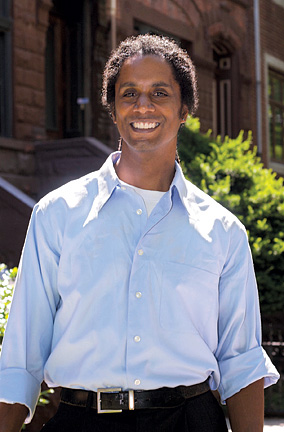 Griffith currently runs the Brooklyn Movement Center, a community organizing group and public-policy think tank founded in June. It is the latest step in Griffith's 25-year-long career fighting for social and economic justice in the New York City borough where his family has lived for four generations.

"The idea is to help local people come from the margins and become part of the central conversation about policy, about things that need to be changed in the community," Griffith says. "There is a whole host of things that people are passionate about but don't necessarily feel like they have the power or a broad enough platform to fight in a very effective way."

Griffith double-majored in English and African American studies at Brown, and after graduating applied for a job as an intern with New York State Assemblyman Albert Vann. Vann represented central Brooklyn, where Griffith's family had long been a fixture.

"All I wanted to do after I graduated was return to the neighborhood where I was born,' Griffith says. Unfortunately, he didn't get the job.

He began gravitating towards the nonprofit sector and went on to found the Central Brooklyn Federal Credit Union, an African American–owned, community-based bank that managed over $1 million in deposits.

Last year, Griffith decided to give public office a shot by running for the New York City Council. In a sense he had come full circle: his opponent was Albert Vann. Once again Vann blocked Griffith's ambition, winning by several hundred votes. Griffith now thinks his loss was for the best.

"My ability to effect change would have been severely compromised by becoming a city councilperson," he says. "I never felt like we had real strong allies within the council on social justice or progressive issues."

So Griffith quit his job at the Drum Major Institute for Public Policy, a progressive New York City think tank, and founded the Brooklyn Movement Center (MC). "I left the highest-paying, highest-profile job that I ever had—a job that I loved, quite frankly—to do something I feel even more passionate about," he says.

Griffith says the Center will provide the tools and the know-how Central Brooklynites need to focus attention on such issues as public safety and neighborhood improvement. "We exert some of our demands through our votes," he explains, "but we don't exert enough of those demands through issue-based campaigns that are very specific about what is wrong in our community and what needs to be changed. We really don't have a well-developed community organizing culture that can function aggressively outside the electoral sphere."

Ben Muessig is a writer and photographer living in Brooklyn, N.Y.

Reader Responses to Power of the Powerless