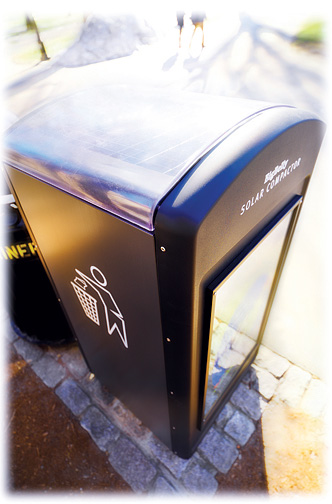 Made by a company called BigBelly Solar, the computerized bins are powered by their own solar panels. When sensors feel BigBelly's belly filling up, the compactor turns itself on and goes to work on the trash. When the belly is full, the machine calls for a pickup.

Brown purchased its first Big- Belly last spring—each runs about $5,000—and they've been such a hit that administrators are considering buying more.

"We estimated that each unit saves about twenty-four hours of labor in a one-year period," says Ginger Gritzo, who coordinates energy and environmental programs for the facilities management office. Crews who would normally be emptying trash cans use their new "found" time clearing snow, supporting outdoor events, and generally making the campus look better, Gritzo adds. The compactors also help cut fuel usage and emissions from the vehicles used to lug trash away.

The smart compactors can make the rest of us look kind of stupid. Because the machines lock their doors while they're compacting, some pedestrians have been piling trash on top of them. That prevents solar rays from reaching the photovoltaic panels and so causes the BigBellys to get heartburn from all that undigested trash.

Reader Responses to Got Garbage?