He Likes to Sew

Andrew Furnas's path to a 2011 Marshall Scholarship began so long ago he wasn't even born yet. About thirty years ago, his grandmother, Judith Louise O'Shea Furnas, taught his father to sew: how to thread needles, wind bobbins, and align fabric seams. After college, when his father went off to live in the wilds of Alaska, he took with him a sewing machine that he used to make himself a nylon-lined quilted jacket. 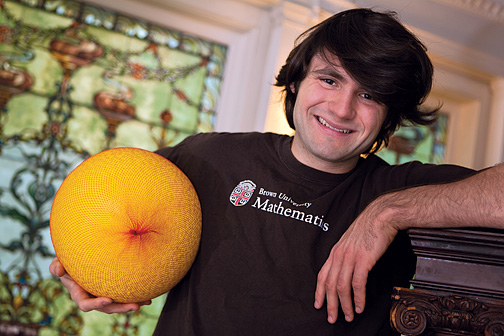 Scott Kingsley
Using a ball and an onion bag, Andrew Furnas demonstrates a mathematical object called the Chebyshev net.
When Andrew turned eight, his father decided his son should learn to sew as well. Andrew took to it so well he went to sewing camp during two summer vacations from school, learning to stitch together pillows and pillowcases and to make pants and shirts. "I just found it interesting," he says. "I liked to sew. I liked to hang out with my dad."

By age eleven, though, Furnas was also pursuing another passion—math. Furnas took AP calculus in his sophomore year at his high school in upstate New York, and, by the time he graduated, he had also taken eight math classes at Cornell, five of them for credit. "Math is just my passion," he says, "the thing that makes me happy."

Furnas says he chose Brown not only for its excellent math department, but also because he knew "Brown would be a place where I could explore lots and lots of other things than math. I was afraid if I went to a different university, they would say, 'Great, you have a lot of math under your belt, you just keep doing it.' What I really wanted was the ability to explore and delve into other fields."

During his sophomore year on campus, Furnas took a RISD class that would eventually inspire him to meld his two dissimilar passions. The course was textiles and apparel, and it rekindled his interest in sewing. "I just realized how beautiful it was to be working in the studio," he says.

In time, Furnas began to think of the studio work he was doing as a series of math problems. Connecting the cylindrical end of a sleeve to the flat side of a shirt, anticipating how certain kinds of fabric drape the body, and figuring out why certain seams are needed to fit certain shapes together—these could all be expressed as mathematical calculations. Why a piece of clothing works the way it should can actually be represented with numbers.

This relatively new field of math is called discrete differential geometry. According to Furnas, it seeks to "find more accurate methods to model physical reality—anything from the way a piece of fabric drapes over objects to the way honey flows when it's dribbled on pancakes." These are not easy-to-solve problems. A seamstress or tailor might understand intuitively how certain kinds of fabric fold over the body or billow when the wind blows, but mathematicians still don't have the tools to predict how a lot of everyday functions work. Furnas wrote his senior thesis on using mathematical models to predict and analyze the behavior of differently woven fabrics.

As one of only thirty-one 2011 U.S. Marshall Scholars, this fall Furnas will study in the United Kingdom at the University of Leeds' School of Textiles and Design. He eventually wants to become an academic who also consults for Hollywood and the computer graphics industry. As amazing and lifelike as today's animated films are, Furnas says, if you look closely you will notice that the clothes on characters' bodies don't move around much. All sorts of facial expressions can be credibly replicated, but modeling the movement of fabric still remains extremely difficult. Furnas says he would like to help solve this problem as well as continue more academic work in discrete differential geometry.

"It's taken all the math I know so far to do this work," he says, "and I've realized that even this is just the tip of the iceberg of what I need to know, let alone discover, before we can really, truly tackle these kinds of problems."

Reader Responses to He Likes to Sew