Making a Better Her

"Is this how you dress?" the CBS network manager asked Alison Stewart '88 when she arrived at the network in 1995. "Have you thought about straightening your hair? Would you wear a suit?" 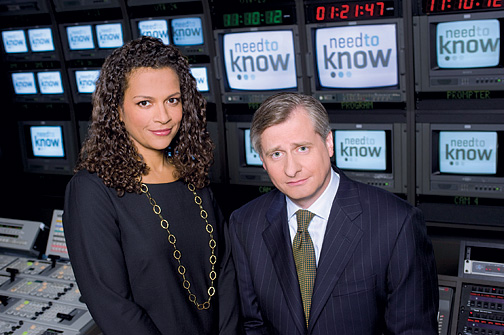 Courtesy PBS
Stewart and her co-host Jon Meacham are blending the Web with TV on thier new PBS program.

Stewart had just made the jump to CBS News from MTV, and her new network assigned her a talent coach "to coach out of me what I had developed at MTV," Stewart says. "She thought I was from Mars. She was horrified by my hair and insisted I wear a jacket."

Fifteen years later that resilience is being tested again, as Stewart moves to another new network, PBS, and a new medium, the Internet. She now co-hosts Need to Know, a news and entertainment program with a strong presence on both TV and the web. The show, which replaced the critically acclaimed news program Bill Moyers Journal, aims to provide in-depth reporting on complex topics like global warming, poverty, and the war in Afghanistan.

"We also did a ten-minute segment on rape in the Congo. You won't see that type of time devoted to that subject anywhere else," Stewart says. "Without commercial pressures to do it faster, quicker, first, we are able to actually sit with a story and go through the weeds."

Stewart and co-host Jon Meacham, the former editor of Newsweek, interview prominent artists, journalists, intellectuals, and politicians about everything from coal-mine safety to the prospects of Spider-Man, Turn Off the Dark, the troubled $65 million Broadway musical whose songs were written by U2's Bono and The Edge.

Stewart, who concentrated in English and American literature at Brown while serving as WBRU's music director, joined MTV in 1991. For the next five years, she contributed news reports to shows like Mega Dose and MTV News: UnFiltered. Stewart says she was encouraged at MTV to develop a unique voice. "You're an individual, be an individual," she recalls her boss there telling her. Stewart chose her beat and her mission: to interest young voters in politics.

"There was a sense the political process wasn't for young Americans, and I thought that was a weird assumption," she says. She knew that if she reported on what interested young people—like student loans rather than Social Security, for example—they would be interested. Stewart won a Peabody award for her coverage of the 1992 presidential campaign.

After MTV, she worked at CBS News, ABC News, MSNBC, and NPR, always adjusting her on-air personality to meet the needs of her network. At CBS, Stewart worked to develop the typical news-speak cadence and learned about traditional reporting along the way, but ABC was a better fit.

"ABC is young brass, CBS is Tiffany," she says. At ABC, she explains, the talent coach said: "She is who she is, let her be who she is, let's just make a better her."

Through all her network moves, Stewart says, one thing remained constant: "I was just trying to understand the world," she says, "and this was a career that allowed me to do that. To help other people to understand or getting information to new people to help them make up their own minds—that's my motivation."

Reader Responses to Making a Better Her