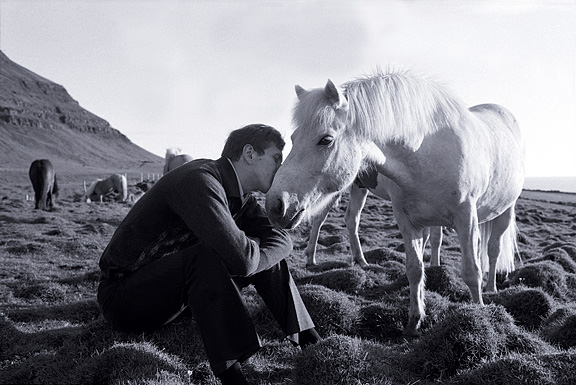 In January 2008, director Liz Garbus '92 flew from New York City to the Sundance Film Festival in Utah, which gave her a rare opportunity to read the newspaper from cover to cover. When she happened upon the obituary for chess champion Bobby Fischer, whose fame ignited the chess craze of the 1970s but whose mental demons sent him spiraling into infamy, Garbus thought: "I can't believe no one has done this story."

Three years later she is en route to the Miami Film Festival as part of a fifteen-city tour of festivals to show Bobby Fischer Against the World, which she describes as a "passion project." Since the 1998 Oscar-nominated The Farm: Angola, USA, which she codirected with her Moxie Firecracker production partner, Rory Kennedy '91, Garbus has produced more than a dozen documentaries about such serious social issues as prison life and addiction, all in cinéma vérité realism.

In 2009 she abandoned that style to produce the essay-like Shouting Fire: Stories from the Edge of Free Speech, which features her father, First-Amendment lawyer Martin Garbus. With Fischer, Garbus shifts subject and style further, taking a more sophisticated approach involving interviews, archival footage, and even animation to create a structured narrative.

"I embraced it as a creative challenge," she says. "I wanted to make a film that is part of the way future generations will look at this crazy era when a chess player dominated the news. And I wanted to stretch myself and make it as beautiful and as historically responsible as I could."

Garbus is accustomed to securing difficult interviews, but the ones for this film were surprisingly tricky. "People felt very private about [Fischer]," she says. "We were really scrutinized and Googled and grilled." Her real achievement, though, is what she did with those interviews. "In my previous films, I'd do interviews where the people were, and then I'd try to make the location look good," she says. This time, Garbus says, she tried to create a "visual unity, having the location say something to construct an aesthetic," which had her shooting in unusual places, such as a tunnel, a warehouse, and a former synagogue.

Garbus says the two years she spent getting to know Fischer was "like a love affair," even as she tried to unravel his anti-Semitism and his approval of the 9/11 attacks. "I think we got as close to him as we could," she says. "He didn't have a social life. His mind never rested."

Despite her own prolific career, Garbus manages to live a much more balanced life than her subject (she and her husband have two children, and during a phone interview she fields a call from him about the best way to clean mushrooms). Professionally, she keeps on her toes. Her next project will probably be another "biopic with edge," she says, but this one will also have scripted scenes, something Garbus has never done before. "I'm nervous," she says. "And I think that's a good thing."