On the night before President Obama's historic health care bill passed the Congress in March 2010, Valerie Jarrett got a call from one of her senior advisers inviting her to a party in the president's private quarters. 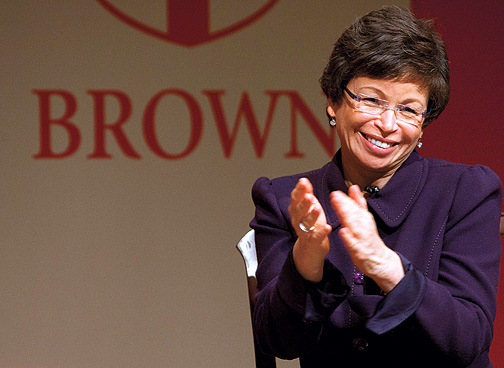 Michael Cohea
Valerie Jarrett has been an Obama confidante since 1991.

Jarrett, who is one of Obama's three senior advisers as well as the head of the federal government's Office of Intergovernmental Affairs, changed out of her pajamas and headed for the White House. "The president invited everyone from the junior-most person to the vice president," says Jarrett.

As the evening waned, Jarrett asked the president, "How does this compare to election night?" Obama replied, "There's no comparison. Election night simply created the possibility for change. Tonight, we created change."

Jarrett spoke at Brown in April as part of the Doherty-Granoff Forum on Women Leaders. She offered behind-the-scenes glimpses of the various administrations she has worked for, from Chicago mayors Harold Washington and Richard Daley to today's White House occupant. When she met Obama in 1991 he was still an unknown, but she helped with his campaigns for the U.S. Senate and the presidency. Along the way, she also ran a real estate company and chaired the Chicago Stock Exchange.

Jarrett began her career as a corporate lawyer in Chicago in the 1980s. One day she found herself sobbing in her office on the seventy-ninth floor of the Sears Tower because she'd just realized she'd chosen the wrong career.

"I promise you that if I had stayed in that law firm in that pretty office, you would not have invited me here today," she said. Her next office, under Harold Washington, was in a cubicle facing an alley—a more satisfying fit.

Jarrett quickly became one of the Windy City's movers and shakers. Still, she managed to keep a balance between work and family. Once, she repeatedly checked her watch during a Halloween meeting with Mayor Daley, "who you might have heard can be a little intimidating," Jarrett said. He asked why, and Jarrett admitted that her daughter's parade was about to begin. "Well, what are you doing here?" Daley asked.

Her daughter still remembers that she showed up in time.

Reader Responses to Her Way