It's Not Just About the Birds

Twenty-five years ago, Phyllis Van Horn Tillinghast landed in the Kenyan wilderness and found the hobby that would become her passion for the rest of her life—bird-watching. 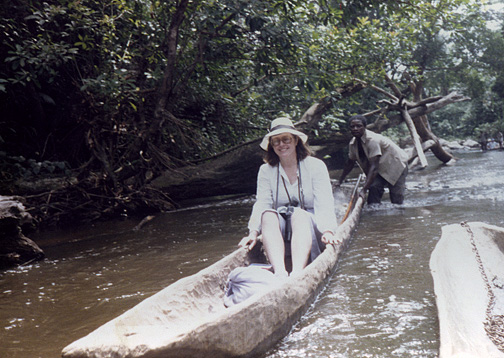 Courtesy Phyllis Van Horn Tillinghast
Tillinghast on a birding expedition along the Gambia River in 1985.

While riding in a Jeep and admiring a breathtaking view of East African wildlife during a three-week vacation, she noticed that many of her fellow safari travelers were diligently scribbling notes about the birds they saw.

"I look around, and all these people are writing things down in their books," says Tillinghast, who lives in Redding, Connecticut. "All of a sudden I felt like I was in the minority because they were all 'oohing' and 'aahing.' I used to always feed the birds in our backyard, but I never thought about keeping a list." By the time the trip was over, she was jotting down notes about beak sizes and tail feathers. She was hooked.

"All the trips I took from then on were birding trips," she says. "And every one of them was physically demanding. You walk from five in the morning to seven at night up and down the hills. Sometimes you're fording little streams or going through the desert."

Tillinghast's arthritis has forced her to abandon such travels. Her last bird-watching voyage was to Panama in 2004. These days Tillinghast is going through a quarter century of notebooks to compile a definitive tally of all the species she's seen. She estimates that the number will be more than 4,400—less than her personal goal of 5,000, but respectable nonetheless. In her copy of Clement's Checklist of Birds of the World, the authoritative tome on such matters, she's checking off each and every species she's seen. She goes through the hand-written lists she saved from her trips and finds each species in the book. Then she marks down when and where she saw it.

Tillinghast's interest in scientific observation was already apparent during her years at Pembroke, where she took classes in chemistry and physics. There were few women undergrads in the sciences then, and Tillinghast says the faculty pressured them to major in other fields.

"We were told in no uncertain terms that we weren't wanted there," she recalls. "They said we were wasting our fathers' money and that we would just wind up having babies." Tillinghast switched to philosophy after her freshman year.

Each of her birding trips has been memorable in its own way, but some experiences stand out. She considers it a feather in her cap that she's seen the rare hamerkop—a brown-feathered wading bird with a long, flat beak—on trips to Kenya, Botswana, and South Africa. Tillinghast remembers the hamerkop, Scopus umbretta, for its unusual status in the bird kingdom. It is a taxonomic loner, occupying a family and genus all its own. "Many people go to Africa and never see it," she says.

There was more colorful plumage deep in the jungle of Papua New Guinea, where she saw 18 species from the bird-of-paradise family. With long, brightly colored feathers and elaborate mating dances, the males are some of the flashiest birds in the world.

While she's proud that's she spotted so many different birds over the years, Tillinghast says it was never her goal to rack up big statistics. "I was always just interested in observing," she says. "You learn about bushes, trees, and grass—habitat, in other words. It really is so much more than a list of birds."

Reader Responses to It's Not Just About the Birds