“I was pretty much in the gym from the day I was born,” says women’s lacrosse player Paris Waterman. As athletic director at the Sanford School, a prestigious private school in northern Delaware, her father frequently brought her to Sanford to watch or play. “I was pretty much raised into sports,” she says. 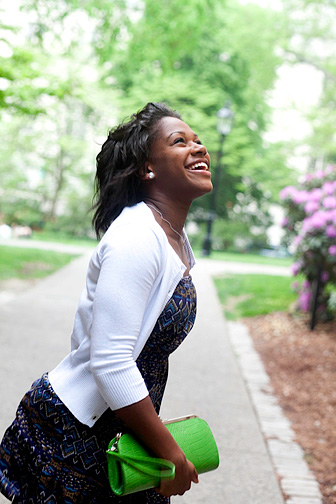 But not, at least at the beginning, into lacrosse. “Basketball was my first love,” Waterman says. She played it competitively at age eight at a summer sports camp run by her father. Then in sixth grade, her teacher suggested she give lacrosse a try. “It was a lot of fun,” Waterman says, but for the most part, “my whole life was to play basketball, basketball, basketball.” Waterman says she loved sports so much because, “I really just love the competition. It’s a time when I can forget about everything else that’s going on in my life and just play and have fun.”

Waterman’s senior year at high school, her mom suggested that she consider playing lacrosse at the collegiate level. “She just kind of put it out there,” Waterman says. When she visited Brown, the women’s lacrosse team head coach, Keely McDonald, watched her play. Waterman was by no means a skilled or experienced lacrosse player. She couldn’t pass with her left hand. Accustomed to defense, she lacked the skills “to be a threat on offense,” she says. But there was also no doubt that Waterman had immense athleticism and great potential.

So for her first and second years at Brown, Waterman played defense, working nonstop with McDonald to improve her game. “I was pushed to my max every day,” Waterman says. Even on days when there was no practice, she went to the gym anyway.

The summer after Waterman’s freshman year, her mom was diagnosed with lupus, an autoimmune disorder. It was by no means debilitating, but she found it hard to be outside for long periods in hot or cold weather. “To see my mom on the sidelines and knowing what she’s going through with the Providence winter weather, it’s been a huge inspiration,” Waterman says. As a good look charm, she started writing “Mom” on one hand and her mother’s initials on the other with marker before every game. She also started a group called Lacrosse for Lupus, spurring her teammates to raise money for research into the disease.

Come junior year, Waterman moved to offense and that’s when her game exploded. She was the team leader in ground balls that year and netted thirty-three goals, second-most on the team. Both junior and senior years, she was named to the All-Ivy League team, only the fifth player in Brown history to receive the honor in back-to-back years. Most impressively, she tried out for and won a place on U.S. women’s lacrosse team, a major steppingstone to making the team that plays in the World Cup. McDonald calls her, “one of the best athletes in the history of Brown athletics.”

Waterman says lacrosse has helped her “to build a lot of character. You’re put in situations that really require you to think differently. The trying experiences are the ones you grow the most from.” Initially, she says, being the lone African American on the team was challenging. “I’ve learned to be a person who can get along with every person I meet,” she says.

Waterman plans to take a year off then enroll in law school. At least, that’s the plan for now. The only thing she’s certain about, she says, is that “I will stay involved in athletics. That’s my passion.”