On the first day of the school year last fall, Randall Dunn '87 greeted students at an entrance to Latin School, the prestigious Chicago private school he heads. He kept an eye out for new students, because it so happens that Dunn is new at the Latin School himself, having become the first black headmaster in the school's 123-year history. 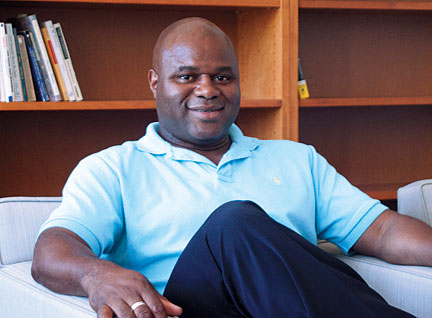 Dunn at the Latin School in Chicago.

Over the last two decades, Latin School has increased the diversity of its student body as part of its mission. In choosing Dunn, it made him the eightieth African American currently running one of the 1,400 schools that comprise the National Association of Independent Schools. Dunn's daughters, who are eleven and thirteen, both attend Latin.

Dunn is particularly suited to empathize with students who might be wondering if they'll ever fit in at the school. As one of five children of a Jamaican-born single mother, he went to high school at the predominantly white Milton Academy in Milton, Massachusetts. In part as a result of that experience, Dunn has made a career of crossing the racial gap at elite private schools. Before Latin, he worked for seven years as the head of the Roeper School of Michigan, a school for gifted and talented students in the affluent community of Bloomfield Hills. He also taught or had top positions at such private schools as the Landon School in Bethesda, Maryland; Derby Academy in Hingham, Massachusetts; Concord Academy in Concord, Massachusetts; and the Potomac School in McLean, Virginia.

Dunn's mother emigrated from Jamaica to Boston in the late 1960s, working as a nanny until she could afford to bring her five children from Jamaica to join her. The family lived in the Dorchester area of Boston, a mostly poor African American neighborhood that was trying to integrate its schools through forced busing. The hostility blacks felt toward the new white students entering the schools perplexed Dunn.

"Buses coming in were stoned," he says. "It was a tense time. Being a kid from Jamaica, I didn't understand why black-white tension existed."

At Brown, Dunn joined the African American activist community. He says he marveled at how "worldly" its leaders seemed and at "the strength they derived from their past." All the same, Dunn says that, as an immigrant from Jamaica, he had a different history and identity. "I didn't always feel the same strength of conviction," he says.

Dunn says he wanted to head the Latin School because of the school's reputation and the opportunity to be in a major urban center like Chicago. The school goes from kindergarten through twelfth grade and counts Nancy Reagan, federal appeals court judge Douglas Ginsburg, and former Illinois Senator Adlai E. Stevenson III among its alumni.

Despite Latin's mostly white heritage, Dunn says, African Americans should feel welcome there, and free to aspire to the same level of accomplishment. "You can be influenced or guilted into what an African American should be doing," he says. "But we are needed in so many different places."