This year marks the 30th anniversary of the Pembroke Center for Teaching and Research on Women, which was founded ten years after Pembroke College merged with “The College,” as the men’s part of the University was then known. Louise M. Newman described the center’s origin in The Search for Equity: Women at Brown University, 1891–1991: “A coalition of faculty, administrators, and alumnae realized that more visibility for the Pembroke legacy was needed: for alumnae, because many still mourned the loss of their college; for students, who had little sense of the history of women at Brown; and for the university community in general, which had little appreciation of the role women had played in Brown’s past.”

With grants from the National Endowment for the Humanities and the Ford Foundation, the center also began a tradition of funding academic studies of women. In 1982, a year after its founding, the center was instrumental in establishing a women’s studies concentration at Brown. In The Search for Equity, Jean E. Howard ’70 described the center’s purpose this way: “The Pembroke Center bears the name of the women’s college, and part of its function is preservative: to make sure the history of women at Brown is never forgotten. Another function is generative: to insure that new paradigms of feminist knowledge are being constructed by men and women at Brown in conversation with feminist scholars across the globe.”

On November 14, the Pembroke Center held its thirtieth anniversary dinner. Nancy L. Buc ’65, only the third woman to serve on the Corporation’s Board of Fellows, gave a personal view of the center’s role. The following is adapted from her remarks. 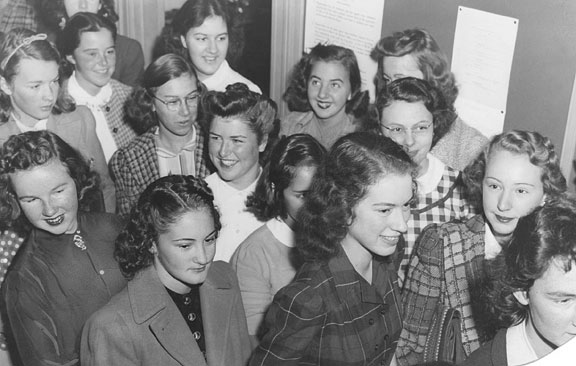 Brown Archives
First-year Pembrokers file into Alumnae Hall shortly after they arrived on campus in September 1940.
We meet tonight in Andrews Dining Room, named for Elisha Benjamin Andrews, the Brown president who encouraged the Corporation to allow women to take Brown examinations and receive Brown degrees.

I note that Andrews was also a proponent of free silver. The Corporation told him to cut that out, whereupon he resigned. When his resignation triggered a storm over academic freedom, the Corporation sent Andrews a long letter saying, basically, never mind, say whatever you want. He unresigned. So Andrews is notable not just for championing the education of women at Brown, but also for espousing academic freedom.

In preparing this talk, I read a lot of books and papers, and you will hear their echoes throughout these remarks. Being liberally educated, however, I began to worry that I was consulting only secondary, not primary, sources. And then I realized that when it comes to the Pembroke Center, I am a primary source—as is each of you here tonight who was a student at Pembroke College in Brown University.

All of us Pembrokers are tied to the Pembroke Center by history, memory, and the joyful emotion of youth. It is we who lived here and ate here, including our beloved Brown Derby Pie. It is we who became Pembroke ladies here—or not—and who joined in activities like the Student Government Association and the Pembroke Record. It is we who took years of gym classes, including modern dance, and who in the time of our great advocate Dean Rosemary Pierrel listened to many convocation lectures on The Role of the Liberally Educated Woman in Modern Society.

We had in Pembroke a room of our own.

But even while we were here, and surely as we moved into and lived in the wider world and brushed up against—or crashed—into reality, we had questions about Brown and Pembroke. Why was the men’s college “the” College? Why did the male Brown students clamor in the 1920s to change the name of the Women’s College in Brown University to something else so as to avoid the taint of associating women with Brown? Why did women have to raise money to build Pembroke Hall, Sayles Gymnasium, and Alumnae Hall after the Corporation refused to do so? Why were there hardly any women on the faculty? Why were there hardly any women on the Corporation? Why were there hardly any intercollegiate women’s sports teams, despite all those years of gym? Why was it okay to have a Department of American Civilization but not okay to have a Department of Women’s Studies or a Department of Africana Studies?

These kinds of questions were writ much larger in the world outside Brown. Why was women’s suffrage such a big deal? Why were women like Golda Meir and Margaret Thatcher acclaimed for their toughness and derided for their lack of femininity? Why were women lawyers, doctors, microbiologists—fill in the blank—subjected to the same duality?

In asking these and thousands of other questions like them, we Pembrokers became the primary source materials for the Pembroke Center for Teaching and Research on Women. We wanted the Pembroke Center to ask these and thousands of other questions in our name. The Center allows us to move from our own experiences—our lives as anecdotes in the sweep of women’s history—to broader epistemologies, to broader theories that will help us, and everyone else, to understand.

The Pembroke Center, however, does not merely pile up little factoids about women. Rather, it does theory—and not little theory, either. There is a line in “Tubby the Tuba at the Circus”: “How much water does it take to feed a thirsty elephant? More than that, much more.” How big a theory does it take to explain women, gender, and difference? Bigger than that, much bigger. And that is what the Pembroke Center does.

To be sure, to us nonacademics these bigger theories seem not just arcane but downright recondite, and we will continue to ask for more accessibility of theory. But never mind. We Pembrokers are proud to have the Pembroke Center for Teaching and Research on Women commemorate and remember us by asking such big questions and doing such big theories. We are proud that it and we are traveling together all the way to the edge of Sarah Doyle’s infinite radius.