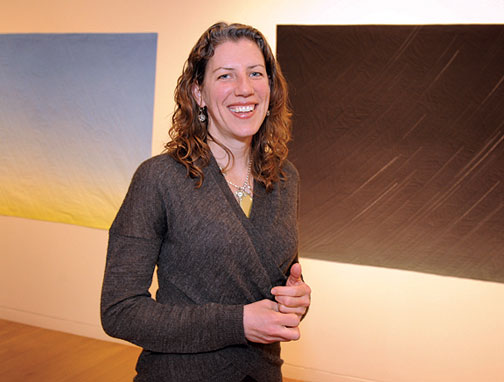 Melissa Ostrow
Artist Anna Von Mertens '95 with two of her quilted pieces at the deCordova Biennial.
The Boston Globe called them “slash artists.” Guest curator Abigail Ross Goodwin ’98 and her cocurator Dina Deitsch say that “mediums and genres have been cracked open and slip from one into another” in the work of the twenty-three artists featured at this winter’s biennial exhibition of the deCordova Sculpture Park and Museum outside Boston.

It’s not just that the artists work in mixed media: installation/sculpture, performance/photography, and every other combination you can imagine. They also blur the lines between public and private, politics and aesthetics, art and craft. As Goodwin and Deitsch write in the biennial’s catalogue: “‘high’ and ‘low’ forms of art find new life in their intermingling.”

A prime example of what Goodwin calls “hybridity” is the art of Anna Von Mertens ’95, a Peterborough, New Hampshire, quilter. This is not your mother’s quilting. Von Mertens says her work “has a traditional backbone, but it’s nothing like what you think.” From a distance, the quilts in Von Mertens’s Look to the Heavens series look like minimalist paintings: an entire canvas in shades of a single color. But closer inspection reveals that each is a starscape. Von Mertens uses a computer program to calculate exactly what the stars would have looked like from a particular earthly vantage point on a particular day in history when “science, religion, and astrology intersect,” as she describes it.

Jupiter Rising, for instance, portrays the sky on January 7, 1610, as seen from Padua, Italy: the date and location when Galileo first discovered that the earth revolves around the sun. A Star in the East, in rich blue and yellow, portrays the sky on February 25, 6 B.C., in Bethlehem—as it might have looked to the Magi. In another series, called You and Me, Von Mertens uses thread to map electric current circulating around two magnetic poles.

All her work is hand-dyed and hand-stitched—“not because I’m a martyr,” Von Mertens says, “but because there’s a narrative that is embedded in the piece. So much of my work I think of as a kind of mapping. Literally tracing these routes with my hands is an important layer of the work.”

Although Von Mertens knew from an early age that she wanted to be an artist, “I chose Brown knowing that I wasn’t choosing art school,” she says. “I wanted a solid liberal arts education.” Her choice was reaffirmed when, during a lecture, Professor of Biology Ken Miller announced that artists often make the best scientists. In both cases, he told the class, “It’s all about pattern recognition.”

Von Mertens returns to this idea constantly, as more and more of her work centers on “observable phenomena,” she says: “looking out into the world and seeing patterns emerge.”

Goodwin and Von Mertens did not know each other at Brown. In fact, they met for the first time in February of last year when Goodwin and her cocurator, Deitsch, arrived in Von Mertens’s Peterborough studio searching for work to include in the biennial. Together, they made more than 100 studio visits and examined hundreds more portfolios with the goal of creating a survey of art and artists working in New England.

Now an independent curator, Goodwin owned and directed Boston’s Judi Rotenberg Gallery before closing it last spring to spend more time with her three young daughters. She had always planned a career in the arts, but the late art history professor Kermit Champa steered her toward gallery work and arranged a key internship. “Champa’s language about art—the way he encouraged close looking, his poetic interpretations—really added to my love of art,” she says. “He was really a magical professor.” Curating, she adds, “is an incredibly creative act—putting the work together, conceptualizing a show, making decisions about where things go in a space, creating an experience for visitors—that process has always been satisfying.”

And it was that process that brought her to Von Mertens’ studio last winter. “Anna really stood out immediately in her combining of thoughtful intellect, incredible skill and craft, and the aesthetics of the end product,” says Goodwin. And it’s the “slash,” in part, that gives Von Mertens’ work its power. “I am drawn to these scientific phenomena—this sort of more ‘masculine realm’ of ideas,” Von Mertens’s says, “and by using quilting and the hands, it kind of reverses the point of view of what I’m looking at—it’s much more subjective and personal.”