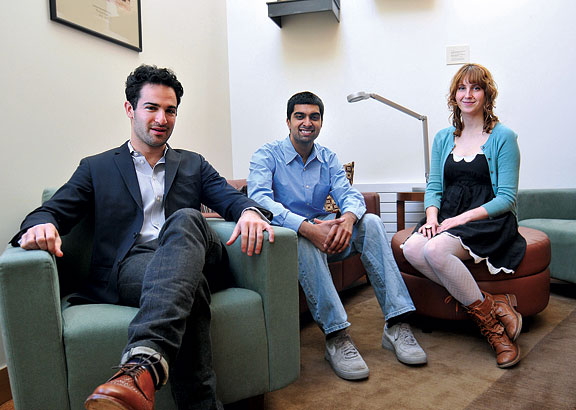 THESIS TOPIC  “I’m looking to see if infants seven- to ten-months old can reason about cause and effect.”

Major accomplishment: Studied the connection between autism in children and their capacity to feel empathy.

“Originally, researchers wanted to find a specific impaired neural system in autistic individuals that was particularly relevant to social communication and understanding. Current research is discovering that it might actually be something not directly involved with social

PLANS FOR NEXT YEAR  Study neuroscience at Oxford.

THESIS TOPIC  “Using techniques in online stochastic combinatorial optimization to help plan for, and respond to, natural disasters. Imagine a hurricane that has struck coastal Florida. The electrical network will have been damaged. We know that we need to route repair crews to fix the network, but we can’t be entirely sure what’s been damaged.

“The question becomes, how can we optimally route repair vehicles to fix the electrical network in as little time as possible given this uncertainty?”

PLANS FOR NEXT YEAR Study education and computer science at Oxford.

LONG-TERM PLANS “To work at the intersection of education and technology. To leave this world a better place for my children.”

Major accomplishment: Worked as a Middle East–based freelance photojournalist for such publications as GQ, Le Monde, and the New York Times. Cofounded the Makoto Photographic Agency.

“I came to Damascus initially to study Arabic during the summer after my first year at Brown. At the time, I had no special interest in the Middle East. But after two months in Syria, I wasn’t ready to leave. Syria really is home for me now. For me, photography was a way to know people and to tell their stories..

“Makoto really evolved out of a shared frustration with contemporary photojournalism and a commitment to seeking a better, more ethical photographic practice. We live in the countries where we work, we speak local languages, and we commit ourselves to long-term, in-depth stories. We try to tell the stories no one else tells.”

PLANS FOR NEXT YEAR Study social and cultural anthropology at Oxford.

“I founded Equitable Origin during my sophomore year after having worked in Latin America for nearly seven years. I recognized that the oil and gas industry needed a social and environmental rating system to support responsible production practices.
“We are currently focused on working with oil and gas operators in Colombia, Ecuador, Peru, Brazil, and Mexico. Latin America has a history of social and environmental conflict. The region is the perfect location to test a certification system for the oil and gas industry.”

PLANS FOR NEXT YEAR Public policy in Latin America at Oxford.