More than 500 alumnae of all ages returned to the campus May 4–5 to network, to celebrate 120 years of women’s education at Brown, and to discuss issues of global, national, and personal concern. The two-day conference included a packed schedule of campus tours, lectures, exhibitions, and spirited panels led by alumnae in spheres as diverse as finance and farming, arts and activism, government and educational reform. In addition, alumnae, administrators, and students traded observations about the University’s transformation and women’s experiences at Brown over the decades. 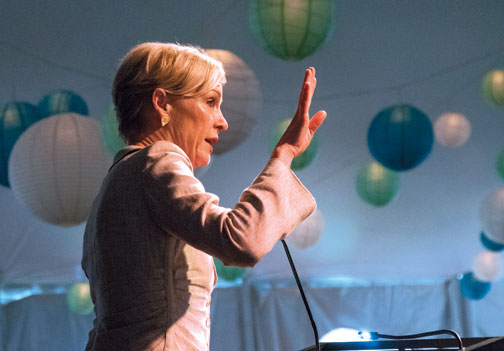 In a keynote speech on women’s health, Cecile Richards ’80, president of Planned Parenthood Federation of America and recipient of a 2010 Brown honorary degree, underscored just how much has changed. In 1891, when the first women students won admission to Brown, the rates of infant and maternal mortality were astronomical, she said. The development of the Pill and other safe means of family planning have made it possible for women to space (and survive) their pregnancies, she said, noting that now 55 percent of Brown students and half of today’s PhDs are women.

Amid all the serious talk, there was also lots of laughter as alumnae discussed their old dorm rooms (better on the Pembroke campus, they concurred) and campus jobs (catering was a favorite—good leftovers to bring home). Discussing the current anti–birth control fever in the United States, Richards wisecracked, “We have to give a little bit of credit to Viagra.” When she cited political commentator Bill O’Reilly’s argument that insurers should cover Viagra because it is used for a medical condition but not birth control because it’s a lifestyle choice, the crowd erupted in laughter and applause.

“Now,” Richards said, “women can no longer be denied health coverage because they use birth control or had a baby…. Being a woman is no longer a preexisting condition in America.”

Reader Responses to 120 Years and Counting