Stories the City Tells Itself: The Video Art and Photography of Neil Goldberg, through June 19 at the Museum of the City of New York (www.mcny.org). 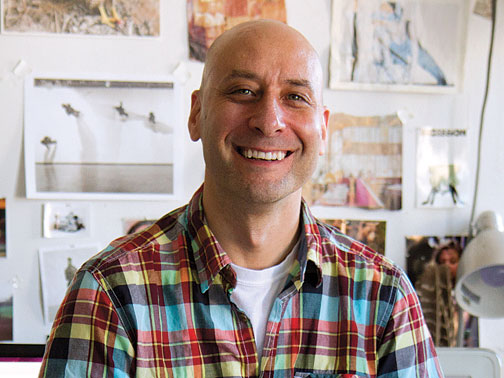 When Museum of the City of New York director Susan Henshaw Jones introduced artist Neil Goldberg ’86 as a Brown graduate on March 1, you might have thought you’d been transported to Commencement in Providence.

After the Brunonians in the audience stopped cheering and hollering, Goldberg  came to the lectern all smiles. The evening marked the opening of his major video and photo show, and he proceeded to thank a large group of people who inspired and helped him, including many fellow Brown alums. To those who know him, it was a typical expression of his generosity and his close connection to his alma mater.

Ever true, Goldberg was busting a barrier at the museum, where his exhibition, “Stories the City Tells Itself,” is its
first to feature contemporary video art. With the eye of a documentary filmmaker, the soul and humor of an artist, and the probing acumen of a psychologist, he has recorded everyday city sights: people emerging bewildered from the stairs of a subway, others deep in thought as they select items from a salad bar, shopkeepers opening their gates in the morning.

Goldberg’s videos and still photographs, the New Yorker has written, “capture the poetry in the mundane.” Perched on a bicycle, he photographed truck drivers’ elbows. He caught people the instant after they missed a subway train. (“I was interested in the shattering quality of disappointment—the way the world seems to fall apart when you don’t get what you want,” he says.)

Another series reveals the surprising beauty of the trapezoids created as the stairways from subway stations open to the outside. (“I love how they share the same basic structure, yet vary in detail from station to station, and how they frame resplendent bits of sky, landscape, and architecture amid the station’s inevitable grunge.”)

Growing up on Long Island, Goldberg first conceived of himself as a writer and political activist. But when he was in junior high school, his father built him a darkroom, which gave him a place to try out visual ideas. At Brown he was attracted to the politics of the student body and concentrated in history and computer science, but his interests didn’t migrate to video for several more years.

Goldberg says he thrives on video’s collaborative method. “I just love it,” he says. “So much of the pleasure is in the process behind it. I feel unconstrained doing video.” To this day, many of the people who influence his work are part of his tight Brown circle. In fact, in the video Wind Tunnel, Jennifer Callahan ’87 and Alicia Svigals ’85 stand stoically as the wind of an oncoming subway train blows through their hair.

Goldberg’s work has been exhibited at New York’s Museum of Modern Art (some of it is part of the permanent collection), The New Museum of Contemporary Art, The Aldrich Contemporary Art Museum, Neue Gesellschaft fuer Bildende Kunst Kunsthalle in Berlin, El Centro de Cultura Contemporània de Barcelona, and the British Film Institute. Later this year he will present his work in Munich.

Meanwhile, New York City critics and audiences are applauding his current show. Writing in the New York Times, Randy Kennedy called it “a tender, moving and sad but also deeply funny collection.… And if you’ve spent any time in New York, to see it is a bit like rummaging around in the parts of your memory that habit elides day by day.”

Goldberg has been gratified by people’s response. “I’ll never look at an elbow the same way,” one viewer told him, and others say they walk out of the museum and look differently at what they see. Which is just what this Brown-trained mind intended.