It’s not every day that you see a canoe on the College Green. But from October until mid-April the dugout in this photo leaned against Manning Hall. 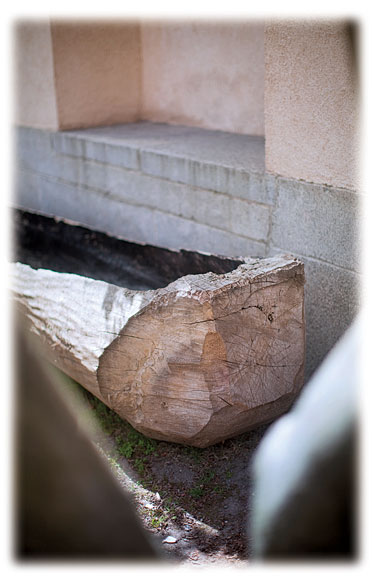 In 1643 Roger Williams described seeing a Native man “goe into the woods with his hatchet, carrying onely a Basket of Corne with him, & stones to strike a fire when he had feld his tree.” Williams wrote that the man spent ten or twelve days burning the tree and scraping out the charred bits.

Last summer, as part of Providence’s 375th birthday celebration, Kiowa Spears, a member of the Narragansett tribe, taught teenagers to do the same for a “living history” play at Roger Williams Park. One result was this 2,000-pound dugout built by the teens. After the play, park rangers planned to chop it up and remove it.

American civilization lecturer Caroline Frank ’03 AM, ’08 PhD intervened. She was curating a Roger Williams–inspired exhibition called “Customs, Manners and Worships: Rhode Island Begins” at Haffenreffer Museum and thought the dugout canoe would fit right into it. The show opened last fall at the museum’s Manning Hall Gallery, and the canoe was set outside the building.

When the exhibition closed this spring, however, the dugout’s future was again uncertain. But it soon found a new home at the Brown/Fox Point day care center, where it will inspire another generation’s adventurers.