It was in Chicago while working on the restoration of Burnham and Root’s 1888 Rookery building that T. Gunny Harboe ’78 found his calling. Although he was a lowly architect-in-training at the McClier Corporation at the time, he was the only member of the Rookery team who knew the nuts and bolts of preservation. After graduating from Brown, he’d worked as a carpenter and then earned a master’s in preservation at Columbia and a second master’s, in architecture, at MIT. Consequently, he was assigned to lead the preservation piece of the renovation. “It was serendipitous,” Harboe says. And it won rave reviews. 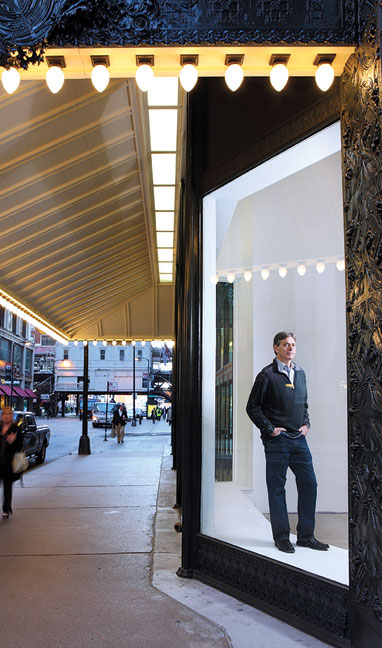 The goal of Harboe’s work is to restore a building to its original condition while making sure it complies with modern building codes and regulations. “It’s not just about re-creating something and making it look the way it did,” he says. “It also has to perform to today’s standards. And you need to do that in a way that still allows the meaning and understanding of the building to read through.”

The nitty-gritty of preservation, especially when original elements have been lost, can include analyzing layers of paint and researching fuzzy old photos. Full-scale mock-ups must be created before on-site work can move forward. On rare occasions building codes and technical problems require design changes, but Harboe says he tries to minimize those.

A Chicago native, Harboe concentrated in history at Brown, where he became fascinated by the concept of experiential learning. He worked at Plimoth Plantation, in Massachusetts, for a class taught by Kingston Heath ’77 AM, ’85 PhD, who is now historic preservation director at the University of Oregon. While studying abroad in Denmark, his father’s homeland, Harboe lived for a week in an Iron Age house at Lejre. Experiences like these, he says, taught him to see buildings as material manifestations of a culture and as vehicles for understanding the past.
In 2010, Chicago magazine named Harboe a “Chicagoan of the Year” for his contributions to the city. He is also among the founding members of the U.S. chapter of Docomomo International, a committee dedicated to the documentation and conservation of modern architecture. “Preservation,” he says, “has been about finding a way to balance saving things that have cultural significance for the public’s benefit versus the gain of people who own real estate.”

Successful preservation can also help return a building to active, efficient use. “The more you can use it and give people the richer experience of seeing its function and how it works,” he insists, “the better it is for the building and for the people.”