The Voice of Ireland 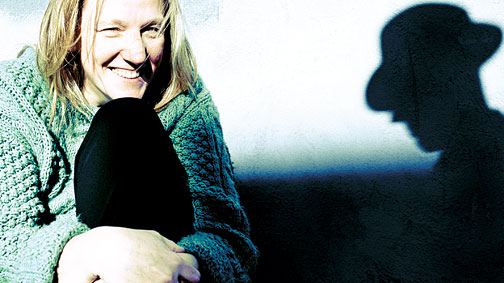 As magical as a fairy tale and just as grim, Honor Molloy’s Smarty Girl pierces the heart with its pure Irish song. In this autobiographical novel, the voice is all: Molloy’s Dublin vernacular is a verbal kaleidoscope of fractured words and malapropisms. Molloy, an actor and playwright who came to Brown to study with playwright Paula Vogel, also gives a dramatic reading for the audiobook of Smarty Girl.

Noleen O’Feeney, a feisty female version of the young Stephen Dedalus, is a quicker study than Joyce’s bookish alter ego. A six-year-old with a “Dutchboy chop,” Noleen has the wits to survive in a baffling, frightening family. When her Da hits her Mam, Noleen escapes to the dream world of a Smarties candies commercial, where the theme song drowns out the smack of flesh on flesh.

Noleen comes from a line of performers. This family eats and drinks stories; when food is scarce Noleen marvels that her big sister Fiona is “keeping us fed on story.” For her seventh birthday party, Noleen acts out the story of Hansel and Gretel, a tale of starving children, dangerous sweets, and treacherous parents, in which the children survive by their wits—a mirror of her own life.

Readers will cheer for this girsha, the Irish word Noleen prefers over “girl.” (“Don’t wanna be a girl ‘cause I hate them.”) You will want to protect her, to hug her and feed her a warm meal, but she finds her own way out of the forest. After her Da hurls a metal box, knocking her out, Noleen manages to wake up in an imaginary haven in the family chimney—replete with a talking greylag goose. Later she lets her mother think the bruise on her cheek came from a run-in with a swing. Another time, while her exhausted mother sleeps, little Noleen—starving, feet pinched by too-small shoes, beaten at home and at school—poignantly tries to nurse her latest baby sister.

Noleen does what it takes to protect her family. When her Da’s nasty mistress tries to blackmail Noleen, threatening to expose the affair to her mother unless Noleen asks her Da for money, Noleen shrewdly tells the woman that her Da has  taken up with a new girlfriend—“Goes with a girl name of Chrissy now”—and then the capper: ”Tell yeh what, I’ll tell me ma, then where’ll yew be?”

Clever, brave, daring, and generous, Noleen is the literary sister of Alice, Eloise, and Pippi Longstocking, but she carries darker secrets. Gina, Noleen’s American mother, muses sadly: “This is what happens when you marry into Ireland. You lose your gumption, you lose your way, like the girl turned to a swan in the mists of myth.”

It is Noleen—no swan she, but a goose smart enough to migrate—who gives her mother the strength to get her family out of Ireland to freedom in America. Gina declares, “And her Noleen, this little girl would cheer the world.” As she will cheer the readers of Smarty Girl.

Reader Responses to The Voice of Ireland