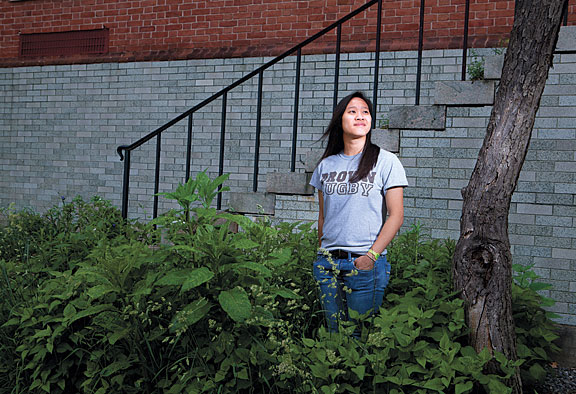 Don’t let that fool you. She broke her nose while playing in the national championships during her sophomore year, and at this year’s nationals she followed that up with a concussion, her second. “We lost to Stanford!” she moans. (The Brown women, a club team, finished third). “When I’m on the rugby pitch I don’t think about injuries. I just go as hard as I can.”

Hsieh’s parents, who are originally from Taiwan, are engineers, and from childhood that’s all she wanted to be. Fascinated by human anatomy, she decided to concentrate in bioengineering. At Brown she did some bench research on nerve regeneration and testing synthetic materials for use in the brain, but her favorite classes were in bioinstrumentation design and entrepreneurship: “There’s no right answer,” she says. “You just fix the problem. And when you fix the problem, there’s always another problem to fix.”

Then there’s rugby. “I used to joke that I’m into bioengineering because I want to heal all the injuries I get in the future from rugby,” Hsieh says. In high school she’d pole-vaulted and played volleyball, but during her freshman year at Brown she joined the women’s rugby team, reveling in the physicality of the sport. “Where else can you just tackle someone and not get in trouble for it?” she asks. The team works out every day. “There’s nothing like running suicides in the rain,” she says. “We’re a community of athletes who literally put their lives on the line for each other.”

Last summer Hsieh received a Royce Sports and Society Fellowship to attend the No Barriers Summit, which annually brings wounded veterans, athletes, and other disabled people to Telluride, Colorado, for four days. In addition to meeting with the manufacturers of assistive technology and seeing the newest prosthetics, Hsieh met scores of veterans and athletes who are pushing their limits. She took skateboarding lessons from below-the-knee amputee Evan Strong, and she hiked with Erik Wiehenmayer, the first blind person to summit Mount Everest.

After graduation, Hsieh headed to Burlington, Massachusetts, for a job with a biotech consulting firm. Long-term, she pictures herself designing prosthetics. “If I were to change the world, that’s how I’d want to do it,” she says.

But she’s still dreaming of the rugby pitch. “One of my ‘back-up plans,’” she says, making air quotes with her hands, “is to find a rugby team in Taiwan and go to the Olympics.” She admits a little sheepishly that she’s been surfing the Internet in pursuit of Taiwanese rugby players. There are about nine players in the whole country, she says woefully.