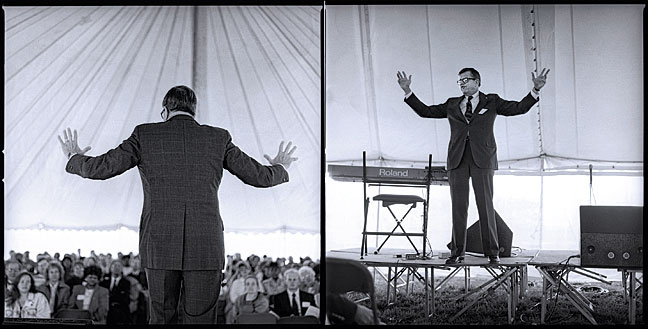 Billy Howard
Colson preaches at Kentucky's Peewee Valley women's prison, Easter, 1994.
Born in Boston, Colson first became known for his ruthless—and ultimately illegal—pursuit of White House enemies while serving as special counsel to President Richard Nixon. As Nixon’s self-described “hatchet man,” Colson infamously boasted that he’d “walk over my own grandmother” to help the president’s reelection. To discredit the Democrats, he recruited a veteran covert operative for the CIA, E. Howard Hunt ’44, who then broke into and bugged the Democratic National Committee’s offices in the Washington, D.C., Watergate Hotel. Hunt also proposed breaking into the office of the psychiatrist treating Daniel Ellsberg, who had leaked the Pentagon Papers.

Despairing over his arrogance and ruined career after Nixon’s resignation, Colson visited his former boss, Raytheon CEO Tom Phillips, with whom he worked before joining the White House, and who had recently been reborn as a Christian. At first, Colson mocked this turn in Phillips’s life, but soon found himself undergoing a religious conversion of his own, which he chronicled in the best-selling memoir Born Again.

Many people at first believed that Colson’s rebirth was as phony as the “dirty tricks” he’d concocted in the White House. Ignoring his lawyers’ advice, he pled guilty to obstruction of justice in the Ellsberg case and served seven months in Alabama’s Maxfield Federal Prison Camp. Thanks to those seven months, Colson spent the remainder of his life evangelizing and advocating for prison reform.

Deeply changed by his experience among inmates hardened by a criminal justice system that seemed only to encourage recidivism, Colson argued that punishment should aim to transform and return criminals to society rather than lock them away. In 1976, he founded Prison Fellowship, an evangelical Christian ministry whose staff and volunteers mentor inmates—and help their families—during both their incarceration and their return to their community. It has since spawned local organizations in 115 countries.

Deeply impressed by C.S. Lewis’s writings, Colson became a serious student of theology, an interest that was fundamental to his religious orthodoxy and his advocacy of conservative policies. An evangelist for the Christian right, he contributed a regular column to Christianity Today and wrote or cowrote more than thirty books, which have sold more than five million copies. On his daily radio program BreakPoint, and the weekly video commentary “Two-Minute Morning,” he spoke out vigorously on religious, political, and social issues of the day. In 2009 he founded the Colson Center for Christian Worldview.

Still, Colson’s devotion to prison reform transcended politics. He continued working one-on-one with inmates, traveling to more than 600 prisons in forty countries over the past thirty-five years. For decades after his own release from prison, he and his wife, Patty, celebrated Christmas and Easter in prisons, where he preached at services and visited with individual inmates in the cellblocks.

Many organizations honored Colson for his work. His highest honor was the 1993 Templeton Prize for Progress in Religion, given each year to the person who has done the most to advance the cause of religion. Other recipients have included Mother Teresa, Billy Graham, and Alexander Solzhenitsyn. Colson donated the $1 million prize to Prison Fellowship. In recent years, he served as an adviser to President George W. Bush on faith-based initiatives and other issues, and in 2008 Bush awarded him the Presidential Citizens Medal, the nation’s second-highest civilian honor.

A former marine, Colson was buried in a private service at Quantico National Cemetery with full military honors, and a public memorial service was held at the National Cathedral in Washington, D.C.. He is survived by his wife, Patty, as well as three children and five grandchildren.