The members of the Class of 2016 are too smart to put much stock in omens. They better be. At Opening Convocation on September 5, driving rain and occasional lightning robbed them of the opportunity to actually walk onto campus through the Van Wickle Gates. (Some of them got a second shot at it the following day, when the Gates were left open.) 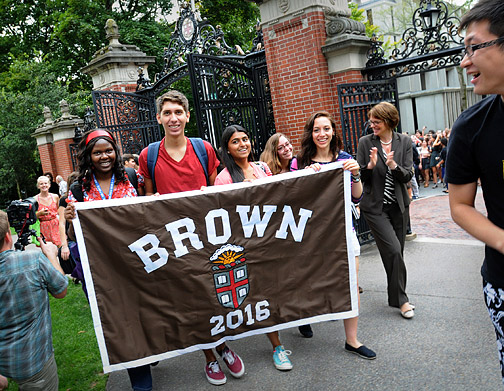 Frank Mullin
New president Christina Paxson, right, applauded her fellow first-years as they entered together through the Van Wickle Gates.
So rookie president Christina Paxson gave her kickoff speech indoors, at the Pizzitola Sports Center rather than, as tradition would have it, atop a wooden platform on the College Green. It barely mattered, given Paxson’s sunny delivery and the freshness of the first-years and new medical, graduate, and transfer students, who fanned themselves with their programs while sitting on folding chairs before her in the humid space.

Paxson urged the students to explore “the terra incognita of the University” with an attitude of “constructive irreverence” and even heresy, which she said characterized Brown’s style of teaching and learning: “consistently asking yourself if theories are in fact logical, if evidence is watertight and … putting forth new ideas that challenge the accepted wisdom of the day, but listening with an open mind to the ideas of others.” 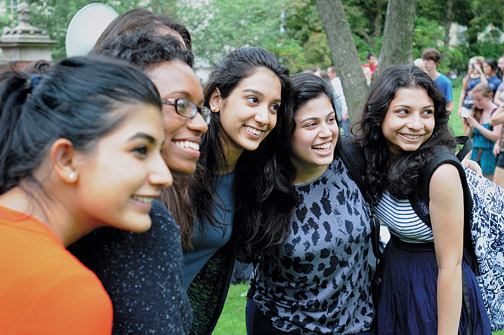 Frank Mullin
Students posed after their ceremonial march through the Gates- before getting serious in class.
To illustrate how learning can happen in unexpected ways, she told a story from her own undergraduate days at Swarthmore. While enrolled in an introductory religious studies class, she had to write about St. Anselm’s ontological proof of the existence of God. She thought his arguments were “simply preposterous,” she said, and “planned to write a scathing attack that would reveal every single flaw in the purported proof.” She wrote one paragraph and realized she was stuck.

A friend who was a philosophy major told her that her problem was that she didn’t understand the proof at all. He suggested she try another approach: to write an essay in support of St. Anselm’s position. “This was the best advice I ever received as a student,” Paxson said. “What he was asking me to do in essence was to approach the work of an eleventh-century cleric with the sense of respect it deserved.”
In this way, she said, she came to understand that intellectual freedom means not a knee-jerk rejection of authority, but a genuine attempt to understand and appreciate what it has to offer.  One cannot honestly reject what one doesn’t understand.

“To apply constructive irreverence to the world and all of life beyond the [Van Wickle] Gates is your challenge,” Paxson told the students. “And your destiny.”