Growing up in rural Chester, New Jersey, Damon Owens was an Eagle Scout, a football star, and, most of all, a devout Catholic. When he arrived at Brown, he was also still a virgin. 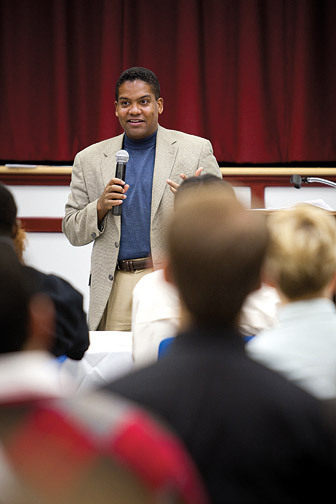 Courtesy of Damon Owens
Owens preaches a message of family values and sexual abstinance.
Then, two days into campus orientation, he had sex for the first time. He liked it. A lot. In the spring he pledged Kappa Alpha Psi, and his frat brothers encouraged Owens’s randiness. “Sex was a sport,” he recalls, “and we were trying to be the best players we could.” His religious foundation seemed to crumble.

Not anymore. Today, Owens preaches what he didn’t practice at Brown. As executive director of the Theology of the Body Institute, a Catholic nonprofit educational foundation based in Exton, Pennsylvania, he teaches religious leaders the Vatican’s positions on sex, family planning, and abortion. Although his organization is not officially linked to the Roman Catholic Church, Owens considers himself a Catholic lay minister. Since 1994, he has appeared on BET, the ABC evening news, and 48 Hours, publicly and forcefully opposing same-sex marriage and government support of contraceptives. EWTN, a Catholic television network, has featured him in programs about faith and family.

At Brown, Owens concentrated in mechanical engineering. While earning his degree, he bonded with other black students on the Shades of Brown Choir and the Organization of United African People (OUAP). “Race was a profound issue growing up,” he says. “I was always the odd man out, and never got used to it until I was at Brown.” His hometown was bucolic and predominately white, so Owens and his parents—despite being Catholic, like much of the community—often felt like outsiders.

After graduation, Owens rediscovered his faith at UC Berkeley, where he received a master’s in mechanical engineering and met his future wife, Melanie, a fellow graduate student and a devoted Catholic. Soon after they started dating, Melanie asked that they take a mutual vow of chastity, a choice that he says strengthened their intimacy and renewed his appreciation of Catholicism. The couple married in 1993. They now have eight children, including two adoptees.

Throughout the 1990s, Owens worked as an engineer at AT&T Bell Labs and Lucent Technologies in New Jersey, helping to develop the infrastructure behind cellular phone networks. Then in 2001 he and several other managers left Lucent to found the technology start-up Celiant Corporation. Within one year, Andrew Corporation, a Chicago manufacturer of antennas and radio hardware, bought Celiant for about $500 million, allowing Owens to turn full-time to promoting his Catholic beliefs.

Since 2011, when Owens joined the Theology of the Body Institute, he’s worked to expand its base of 2,000 donors. About 1,800 students have passed through its training seminars. These are $1,100 five-day retreats, at which people take mini graduate-level courses taught by professors of theology and philosophy from several universities. Participants also join in intensive prayer sessions.

Owens says Theology of the Body applies a modern spin on ancient Biblical teachings. While classic Catholicism can be logical, deductive, and rule-driven—“You shall do this; you shall not do this” is how Owens describes it—the institute wants to provide an approach that is more personal. The work is inspired by the writings of Pope John Paul II. “He looked at modern philosophy, science, and anthropology to rescue faith from archaic language,” Owens says.

Public speaking and event promotion are Owens’s primary responsibilities, especially lecturing at conferences and high schools, talking on the radio and on television, and directing direct mass mailings. More generally, though, he says his mission is to rise above the vitriol and bumper stickers that too often occupy our public discourse on religion, and to offer a new perspective on faith.

“I don’t have any aspirations for anything political or secular right now,” he says. “Just to contribute a better dialogue in the public square.”

Reader Responses to Sex and God