After a massive snow storm sent the Brown Corporation packing to avoid being stranded in Providence in early February, the group reconvened by teleconference a week later and formally approved the creation of the Brown School of Public Health, which the faculty had already endorsed by unanimous vote in November. 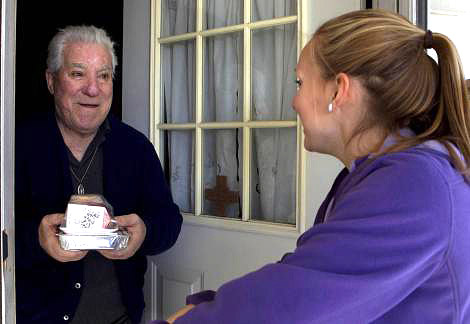 Mike Cohea
When it comes to the public health issues facing seniors, a recent Brown discovery is that programs delivering meals helps keeps seniors living in their own home, easing the burden on nursing homes and other costly alternatives.
Brown’s public health program has grown rapidly over the past decade, building strengths in such areas as geriatrics, addiction, and biostatistical research. Student enrollment—undergraduate and graduate—has increased from 75 to 261, while the faculty has increased to 210. At the same time, research funding from the National Institutes of Health (NIH) has doubled to more than $60 million, an amount on a par with major public health schools. Associate Dean of Medicine for Public Health at the Alpert Medical School Terrie “Fox” Wetle, the new school’s first dean, must now earn its accreditation from the Council on Education in Public Health.

Elevating the current public health program to the level of a school is not just a matter of status, Wetle says. She points out that it will help researchers compete for funding, such as Centers for Disease Control and Prevention grants that are restricted to researchers in accredited schools of public health. In addition, the expansion is already helping attract top students and faculty. “When we’re recruiting students, when we’re recruiting faculty,  they often express the wish to work in a school  of public health connected with a medical school,” Wetle says.
The aim of the new School of Public Health, Wetle says, is to gather the best faculty and students, not only to conduct research on urgent public health problems, but to change the world beyond. “We’re training people who will affect policy,” she says.

Reader Responses to A Healthy Place