A Lifetime of Giving Back

Lacy B. Herrmann—entrepreneur, venture capitalist, and founder of the Aquila Group of Funds—died September 24 at age 83, in Sleepy Hollow, New York. A Brown trustee emeritus, he was a bulwark of the Brown Alumni Association for many years. 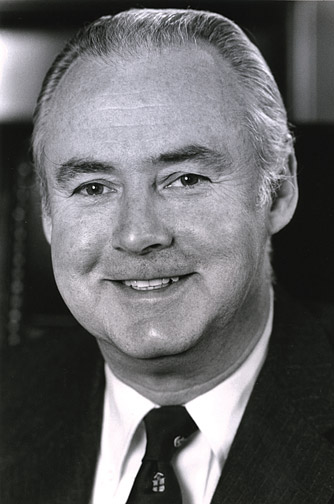 Brown Archives
A child of the Great Depression, Herrmann lost his father at age thirteen, received a full scholarship for high school, attended Brown on an NROTC scholarship, and earned his Harvard MBA on the G.I. Bill after serving in the U.S. Navy. Grateful for the opportunities education had afforded him, he spent much of his life giving back to Brown and to the world beyond.

He began a long career in venture capital and finance in the 1960s, when he invested in Buxton’s Country Restaurants, a family-owned chain in New Jersey. After the group expanded too quickly and went into Chapter XI, Herrmann, who took over as president and chairman, turned the company around.

After founding Capital Cash Management Trust in the mid 1970s, he created his own mutual fund company in 1984, naming it Aquila, the Latin word for eagle, to stress its raptor-like vision and focus. The name was apt: Aquila’s investments were both prescient and opportunistic. Herrmann was among the first to see potential in single-state tax-free municipal bond funds, and in 1985 Aquila launched the Hawaiian Tax-Free Trust. While others created similar funds in large states such as California and New York, Aquila focused on smaller states: Arizona, Colorado, Kentucky, Oregon, Utah, and Rhode Island, where it created the Narragansett Insured Tax-Free Income Fund in 1992. Specializing in fixed-income investments, the Aquila Group includes seven tax-free trusts, as well as an equity fund and a high-yield corporate bond fund. It won the 2003 Lipper Award. Herrmann’s daughter, Diana, took over as president and CEO, but Lacy remained chairman until his death.

Actively involved with Brown all his adult life, Herrmann was his class president, the president of the Brown Alumni Association, a director of the Brown Club of New York City, and president of the Brown Club of Fairfield County, Connecticut. He founded and chaired the New York club’s annual Independent Award Dinner, a fund-raiser that for 25 years honored such maverick thinkers as Ted Turner ’60, Steve Jobs, Mikhail Gorbachev, and Margaret Thatcher. In addition to helping the club, the event raised scholarship money for Brown.

A member of the Brown Football Association, Herrmann donated the footballs for home games. In 1976 he headed Operation Pride, which raised more than $250,000 for renovations to the Brown Stadium.

Elected to serve as an alumni trustee from 1986 to 1990, Herrmann served on the undergraduate education committee and the development and alumni relations committee. He received a Brown Bear Award in 1986 and led the Commencement procession as grand marshal at his 50th reunion in 2000.

Herrmann is survived by his wife, Elizabeth; daughter, Diana; son, Conrad ’82; and two grandchildren, including Christine ’16.

Reader Responses to A Lifetime of Giving Back