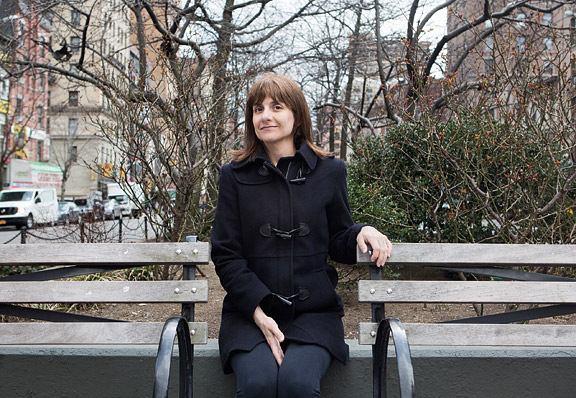 Dustin Fenstermacher
Even the most liberated feminist "can still go to pieces over a boy," says playwright Gina Gionfriddo.
Rapture, Blister, Burn is an intelligent, highly literate, and charming play that started taking form when Gina Gionfriddo ’97 MFA became fascinated by Internet pornography.

Rapture, which premiered in New York City last June and was a finalist for the 2013 Pulitzer Prize—which went to Disgraced by Ayad Akhtar ’93— tells the story of Catherine Croll, a superstar feminist scholar who returns to her hometown in her mid-forties and rekindles an affair with a former lover. She winds up hosting a summer school class where three generations of women—her mother, another forty-something, and a twenty-one-year-old—debate the tenets of feminism. As in Gionfriddo’s previous work, Rapture offers no easy resolutions.

“It’s about how your ideal politics are sometimes not easy to execute in your personal life,” she says. “You can be an incredibly evolved and smart and liberated feminist and still go to pieces over a boy.”

Gionfriddo, who grew up in Washington, D.C., has described her young self as “a really macabre, little gothette of a child” who spent time in graveyards and obsessively reread an issue of Life magazine about the British serial killer the Yorkshire Ripper. She attended Barnard College and went on to Brown to study with playwright Paula Vogel.

Gionfriddo’s  2004 play After Ashley opened to rave reviews at the Humana Festival in Louisville, Kentucky, the nation’s premier venue for previewing new plays. After Ashley describes the plight of an American teen whose mother’s death is sensationalized by the media. It was directed by Peter DuBois ’97 MFA, who has been a collaborator ever since.

Gionfriddo’s next play, Becky Shaw, a dark comedy of manners loosely based on Thackeray’s Vanity Fair, made the short list for the Pulitzer Prize in 2009. Along the way, she has written for TV’s Law & Order and, most recently, penned an episode of the new Netflix series House of Cards, starring Kevin Spacey. She has no intention of leaving theater, though. “I don’t think I could ever stop writing plays,” she says. “It remains the one area of my writing life in which I have the final word.”

Gionfriddo says she drew inspiration for Rapture from Wendy Wasserstein’s melancholy 1988 play, The Heidi Chronicles, which was also about a middle-aged woman navigating the shoals of love, life, and career. Its protagonist, Heidi, receives a provocative warning from her on-again, off-again boyfriend. She’s told she’s “part of a generation of women who are going to achieve all these great things, but never going to be very happy,” Gionfriddo says. She remembers seeing the play during her sophomore year at Barnard.

“[I] found it profoundly sad and was so very affected by it,” she says. The idea that you could not have it all—a high-flying career and rich family life—“is not something women in their twenties want to hear.” But as she grew older, she says, “I became a single woman of a certain age with a certain amount of success, but also melancholy about why the personal side of my life didn’t match the professional.”

Almost two years ago, Gionfriddo became a single mother. She has reduced her work schedule and now writes in a friend’s apartment only a few blocks away from her home in Manhattan so she can be close by. Gionfriddo isn’t sure how parenthood is going to affect her writing, but she says she has gained a new appreciation of the difficulties in balancing a career and family.

“I was one of those twenty-year-olds who didn’t want to hear from an older generation of feminists that balancing work and family was going to be hard,” she says. “Now I see it actually is very hard.”

Reader Responses to Art and Life