Scott Metcalfe ’85 is on a mission to convince music lovers of one thing: you don’t have to be a scholar or a religious fanatic to enjoy vocal music written before the time of J.S. Bach. 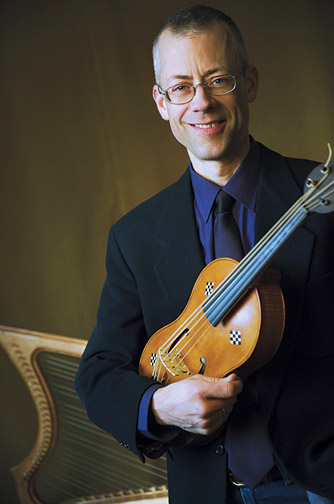 Liz Linder
Scott Metcalfe describes himself as a fifteenth-century man.
As director of the Boston-based Renaissance music group Blue Heron, Metcalfe is all too familiar with the prejudices against early music, particularly the notions that composers of nineteenth-century symphonies invented musical expressiveness, and that performances of Renaissance music have to be pious and boring. Listening to rock music, concertgoers have become so inured to hearing amplified and processed music in immense arenas that “for Blue Heron to ask people to slow down and pay attention to a few singers making music unaided by amplification—that does challenge the dominant trends of twenty-first-century culture,” he says.

Metcalfe concentrated in biology as an undergraduate—he specialized in salt-marsh ecosystems—and studied languages, literature, and history. At the same time, however, he took modern-violin lessons with Machie Oguri-Kudo, who was then in residence at Brown with the International String Quartet. On his own, Metcalfe studied historically informed performance—that is, the effort to perform early music on the instruments of that era and in authentic period style.

Metcalfe says his development as a musician has followed a backward trajectory: from mainstream violin music to Baroque music to Renaissance vocal music. Today he self-deprecatingly describes himself as a “fifteenth-century man,” directing the music of the Franco-Flemish composer Johannes Ockeghem while, in his spare time, working on a new edition of the songs of Gilles Binchois.

After graduation, Metcalfe freelanced widely as a Baroque violinist. He wanted to stop touring, however, and “build something where I was,” and when he was invited to conduct an early-music vocal ensemble, he says he felt like he’d been given “the keys to the kingdom.” He began educating himself in the repertory and in performance practices, discovering an “enormous new world of music.” In 1999, he was asked to help form and to direct the group that became Blue Heron. And in 2005, he earned his master’s in performance practice at Harvard.

Metcalfe says violinists and singers have complementary ambitions: violinists want their instruments to express words, while singers want to articulate dance-like rhythms. Especially in Baroque music, which is often based upon texts, Metcalfe finds a common ground in the desires for both articulation and variety.

Metcalfe and Blue Heron are midway through a five-CD, multiyear collaboration with early-music scholar Nick Sandon. Sandon has reconstructed—and Blue Heron is recording—Cambridge University’s Peterhouse Partbooks, a collection of choral parts dating back to the reign of Henry VIII, which almost without doubt were prepared for use at Canterbury Cathedral. The Partbooks are almost unknown because the manuscripts containing tenor parts and some of the treble parts have been lost over the centuries. It has taken Sandon decades of detective work to reconstruct performing editions that sound completely authentic.

Reader Responses to Slow Down & Listen