“At a time like this,” said African studies chairman Corey D.B. Walker after the March 21 death of literary giant Chinua Achebe, “we could draw many words of comfort from various African cultures and traditions to honor him. The most fitting is the simple and elegant phrase, ‘A great tree has fallen.’ ” 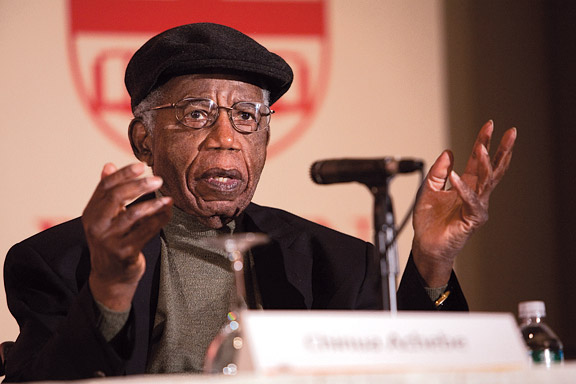 Scott Kingsley
"Africa's postcolonial disposition is the result of a people who have lost the habit of ruling themselves," Achebe wrote in his last book. He died in March.

Celebrated for his 1958 novel, Things Fall Apart, Achebe joined the Africana studies department as the David and Marianna Fisher University Professor in 2009. During his four years at Brown, Achebe organized an annual colloquia series that convened international scholars, policy makers, politicians, and writers to discuss critical topics related to Africa, including the 2010 Nigerian elections, the Arab spring, and the crisis in Darfur.

But Achebe will be best remembered as a keen and insightful storyteller. “Achebe’s contribution to world literature is incalculable,” said former President Ruth J. Simmons, who brought him to Brown from Bard College, where Achebe had gone after a car accident left him paralyzed and confined to a wheelchair.

Born in Nigeria in 1930, Achebe was educated in English-language schools, devouring the works of Yeats, Dickens, and Conrad with a zeal that earned him the childhood nickname “Dictionary.” Achebe was just twenty-eight when he drew the world’s attention with Things Fall Apart, a deceptively plainspoken but devastating novel about the impact of colonialism seen from the perspective of a member of Achebe’s Igbo tribe. Still in print, the novel has sold 10 million copies and been translated into fifty languages. It is regarded as a cornerstone of modern African literature.

In his forties Achebe startled academia when he reread his once-beloved Heart of Darkness and found Conrad’s racism inescapable. “The real question,” Achebe wrote in an essay, “is the dehumanization of Africa and Africans which [an] age-long attitude has fostered and continues to foster in the world.”

Achebe received many honors, including the Nigerian National Merit Award, his nation’s highest award for intellectual achievement, and the Man Booker International Prize. In addition to fiction, he wrote essays and poetry, and in recent years, lamenting the dearth of African children’s literature, he began to fill that void with stories, some his own and others his retellings of traditional folktales.

Last fall he published There Was A Country, his much-anticipated memoir of Biafra’s failed 1967 attempt to secede from Nigeria. Achebe had been closely involved in the war. “Africa’s postcolonial disposition is the result of a people who have lost the habit of ruling themselves,” he wrote. “It is for the sake of the future of Nigeria, for our children and grandchildren, that I feel it is important to tell Nigeria’s story, Biafra’s story, our story, my story.”