Le Tran’s mother came to the United States from Vietnam in 1997. She hadn’t wanted to leave. She loved her home country. But she missed her family, who had emigrated two decades earlier, and she wanted her three children to have a better future. 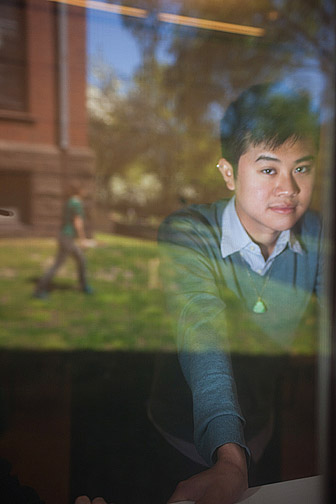 When Tran entered high school, he fared poorly academically. He barely knew English. “I thought it would just be great if I could get through high school,” Tran says. “No one in my family had done that before.” He was placed in a special education class, but felt he was not being challenged enough. So he went to the school’s guidance counselors and told them he was good at English and could write well. This wasn’t true, but he returned daily to plead his case to administrators. In the end, they broke down. “People just trusted me,” Tran says. “I think at some point they just wanted to get me out of their office.”

With the encouragement of friends and teachers, he worked hard at school. By junior year, his grade point average was 4.6, and college was an option. Still, Tran says, “I really didn’t know what college was.” He only applied, he says, because “my mom said after high school, I would need to get a job. She told me I was too lazy to find one so I said, ‘Okay, I’ll go to college.’”

One day, he found himself at the library with just twenty minutes until it closed. He wrote his entire Brown application in that time. “I typed nonstop and didn’t even read it over,” he says.

At Brown, Tran majored in sociology and ethnic studies. With a Mellon Mays Fellowship and a Brown International Scholars Award, he spent two summers and the fall of his junior year in Vietnam, studying LGBT youth. Tran was delighted to find Vietnamese society far more tolerant than he had expected. He says the government’s recent campaign to raise AIDS awareness has forced the country to talk about homosexuality, which had previously been taboo. “From my own research, I found that families are protective, safe havens from outside discrimination,” Tran says.

Tran received this year’s Jin Prize for academic excellence and his contributions to the Brown community. He plans to get a PhD in sociology and study the Vietnamese diaspora.