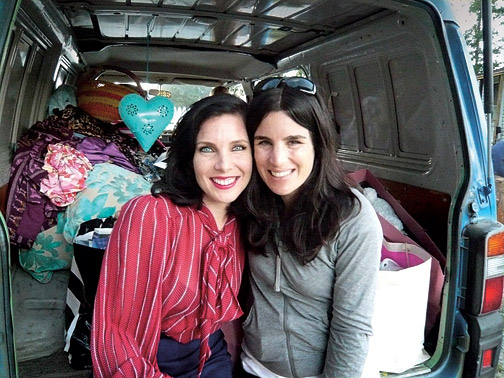 Courtesy Elyse Dutton
ON THE ROAD AGAIN- Executive producer Elysa Koplovitz Dutton (right) hams it up with Ass Backwards costar June Diane Raphael on location in Albany, New York. Chris Nelson '94 is also an executive producer of the film.
As a semiotics student in the 1980s, Elysa Koplovitz (now Dutton) ’89 put her own spin on the soap opera genre with Sob Story, which she and fellow producer Maggie Malina ’90 created at Brown. “Even though I didn’t do my thesis on Jacques Derrida or anything,” Dutton says, “I liked to think of myself as being somewhat subversive in my own way.”

Twenty-five years later she’s teamed up as executive producer with director Chris Nelson ’94 to undercut another familiar genre: the road movie. In the comedy Ass Backwards, which debuted at Sundance in January and is screening nationally, comics Casey Wilson and June Diane Raphael play two goofy Manhattanites who return to their hometown to face their childhood nemesis, played by Alicia Silverstone. Along the way they spend an evening at a lesbian commune, pole dance at an upstate New York strip club, and share a jail cell with a reality TV sex addict.

Dutton says she fell for the outrageous comedy of Wilson and Raphael while directing screenplays for HBO Films. “I worked with them on scripts that we pitched to Anna Farris and Kate Hudson,” Dutton says, “but Casey and June wanted to write something that they could star in.”

When Michael Costigan ’90, who was the executive producer of Prometheus, Robin Hood, and Brokeback Mountain, introduced Dutton to Chris Nelson’s quirky short film Cara, she recognized a kindred spirit. “Cara,” Nelson says, “has a little bit of rebelliousness that speaks to the female punky spirit of Ass Backwards.”

“Casey and June’s comedy feels almost old school, like Lucille Ball or Carol Burnett,” he says. “It’s very physical and completely committed. Casey and June are worldly characters who just go for it. They have all acceleration and very little brake.”

Ass Backwards breaks another movie convention: “There’s no guy here,” Dutton notes. “It’s hard to think of a female comedy where it’s not about a romance in the end,” Nelson observes. “This really is about the women being funny in a way that you would normally find in a male buddy comedy. I thought that was unique and original.”

In Make Your Move, Jon Birger ’90 encourages straight women to go for what they want
Service & Advocacy