The Day a President Died

It was one of those sunny autumn afternoons that smell of apples and falling leaves. Thanksgiving break was just a few days away. I checked the date as I walked out of Miller Hall and headed for the Thayer Street market. November 22, 1963.

I was happy at college, but I didn’t know that then. Fear of what seemed like a hellish future eclipsed my good feelings. I knew I had to get married, but my attempts at dating were spectacularly unsuccessful. I was hoping to find a career, but the only things I liked doing were sleeping and reading. How would I manage? My delight in the campus—my friends, the solace of books, skating at Aldrich Dexter, and exploring Fox Point—was dulled by anxiety. 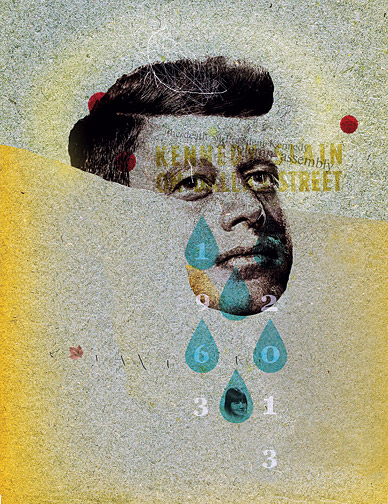 My dread was part of a collective terror. Many of us thought the world would end soon in World War III. In grade school we had been taught to hide under our desks when the bombs dropped. As freshmen in college we toured a bomb shelter in downtown Providence with shelves of canned goods and a crank to filter radiation out of the air after the inevitable nuclear holocaust. When turned, the crank made a shrieking, metal-against-metal noise; I heard that noise in my dreams. When family neighbors in Westchester got drunk at cocktail parties, they confessed that they had armed themselves against others who might want to use their bomb shelters—sorry, but they wouldn’t be able to share. As sophomores during the Cuban missile crisis we had listened to our young, handsome president telling about the risk he was taking by challenging Nikita Khrushchev. “Our goal is not the victory of might, but the vindication of right,” he said as we listened to the scratchy radio in the lounge of Bates House. Would the Russians back down? Some classmates headed for home to be with their families at the end.

We stayed up late debating whether it was better to die in a fiery flash, be captured by the Russian soldiers who were waiting off the coast, or slowly starve the way characters did in On the Beach by Nevil Shute, set portentously in 1963. In late-night conversations we quoted the elegant despair of Edna St. Vincent Millay—my candle burns at both ends/ it will not last the night. In class we studied the elegant despair of T. S. Eliot—I had not thought death had undone so many. The question was how we would survive. The answer, my friend, was blowin’ in the wind. Would it all end with a bang, or with a whimper, as Eliot wrote? Fire or ice, as Robert Frost wrote? One thing we knew: it was going to end, and end soon.
So that sunny November afternoon when I saw a girl from my class sobbing as she stumbled down Thayer Street, I wasn’t surprised to find the world indeed coming to an end. The president had been shot. The president had been shot in Dallas in a motorcade with the governor of Texas. The president was at Parkland Memorial Hospital in Dallas. Jackie’s chic clothes—her pink suit and pillbox hat—were covered with blood. The doctors were giving the president transfusions. By the time the afternoon sun sent its long shadows across the lawns in front of Sayles Hall, the president was dead.

In those days the only publicly available television on campus was a small black-and-white set in the Blue Room, where on that day it seemed the whole student body had crowded in, all of them standing or sitting on the floor and draping themselves over the few chairs to watch the long, sad four-day weekend of national mourning. The picture was grainy, the images tiny, but the little box seemed to hold the whole world. There was the young Walter Cronkite with his heavy black glasses and moustache, choking up as he announced that the president had been pronounced dead. There was CBS reporter Tom Pettit in the chaotic basement of the Dallas Police Station trying to keep up with the jumble of events. A pale Lee Harvey Oswald was saying he hadn’t done anything as he was pushed toward a man named Jack R:uby. Then there was a popping sound, and the next minute Oswald was dead and the screen was filled with a shoving crowd of men.

Before that weekend, television was where we watched the Mouseketeers and I Love Lucy. Now our history was unfolding in miniature before us, in black and white, with the tinny sound turned up as high as it would go. There on screen was little John-John saluting his father’s coffin, and there was the weeping widow, with her sad face and lovely clothes, standing entirely alone with her two children. There was the riderless horse, bucking in the autumn sun. I watched. I went for walks. I came back to listen. The clatter of hoofs drowned out the guns of the funeral salute.

As terrible as that November day fifty years ago may have been, its memories have not entirely overwhelmed those of my days and nights at Brown. My first days as a college freshman were passed in a haze of anxiety. My roommate was a beautiful blue-eyed princess from the Midwest who had special study clothes, date clothes, and classroom clothes—all pink or baby-blue—and who read sitting up straight at the desk on her side of the room. The desk on my side was piled with papers, books, coffee cups. I read in bed, often under the covers, and I tried never to change my clothes. Trapped together on an upper hall of Andrews facing the back, we seemed helpless in our opposite ways. Soon we had gathered a few more helpless freshmen who huddled with us under the high ceilings of the cafeteria and made tea on hot plates brought from home. To get to class I would wander down the steps of Andrews and out past the Pembroke Library and down Brown Street.

In the fall of 2012 I returned as a visiting lecturer. I hadn’t been back for more than an evening or an afternoon since graduation. As a teacher walking that same sidewalk down Brown Street last fall, I had vivid, nostalgic flashbacks: of sitting on the grass with friends; of watching from the high windows of the Pembroke Library as a boy I had a crush on walked up Meeting Street (did he know he carried my heart in his pocket?); of buying my first yogurt (then a new, strange thing) at the Thayer market; of splitting a piece of cherry cheesecake at Gregg’s (now Au Bon Pain); of spending that weekend in the Blue Room watching television. Nostalgia! Gone is the anxiety that killed my ability to appreciate the beauty of the place and the luxury of having nothing to do except learn. These shimmering images of the past seemed more alive than memories—I was reliving my experience at Brown, only this time I was reliving it joyfully.

Nostalgia is the bittersweet memory of the past, literally an ache for homecoming—the bitterness is the passing of time, the sweetness is our survival. The Brown campus, it turns out, is nostalgia central for me. Returning to it was like having a romance with an old friend. I reveled in the past that I can enjoy now. I did get married; I did find a career. Recently, dozens of academic papers on nostalgia have been published at universities from the Netherlands to South Africa, and the United States. Nostalgia is a good thing, the psychologists all agree. We use our longing for the past to give our lives meaning. Nostalgia makes us feel more important and more generous: “It serves a crucial existential function,” says researcher Clay Routledge of Britain’s University of Southampton. British researchers have developed the Southampton Nostalgia Scale (How often do you experience nostalgia? How significant is it for you to feel nostalgic?) I scored a seven out of seven. We’ll always have Paris!

What do I remember learning at Brown? How to survive a broken heart. How to cook an elaborate stew on a hot plate. That my worst fears rarely come true. How to read a book a week. When Professor David Hirsch talked to me about Henry James and Edgar Allan Poe, the ghosts in their stories jumped out at me. I read F.O. Matthiessen’s American Renaissance with Professor Barry Marks, and I have since written my own books about those Concord writers—Emerson, Thoreau, and their neighbors, the loony, impoverished Alcotts. I thought personal style was everything in those days—how could I be friends with a girl who wore pink? I got a little smarter. My first roommate and I became good friends after all. I loved her.

Now I’m smart enough to see that I was with my people at college, a generation of confused and frightened kids looking for and finding our answers in books. As it turned out, in spite of the death of a president on an autumn day, we didn’t die at college, and we didn’t die soon afterwards. World War III was a fearful, exaggerated chimera. We didn’t die, and instead we did something much more difficult than dying: we learned how to live.

Susan Cheever is the author of fourteen books. Her biography of the poet E.E. Cummings will be published in February. She is working on a history of drinking in America.

Reader Responses to The Day a President Died