On a Saturday in November, three women meet at a home in Arlington, Massachusetts. As they eat cranberry-walnut cake and drink coffee, they look like any book group gathered to discuss the latest best-seller and catch up on families and careers. 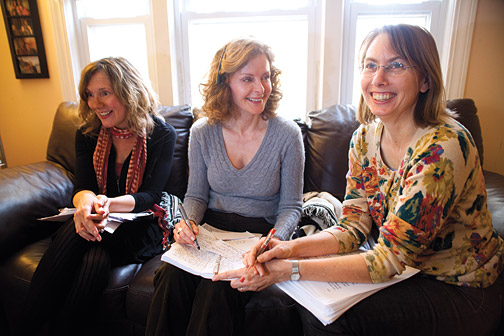 Mark Ostow
From left, Searle, Harleman, and Donovan at Searle's home in Massachusetts.

In fact this is a gathering of published authors. Gail Donovan, Ann Harleman, and Elizabeth Searle, all ’88 AM, have been critiquing one another’s work for almost thirty years. They first met as master’s candidates in creative writing, learning their craft under the guidance of novelists John Hawkes and Meredith Steinbach. The house they are meeting in today belongs to Searle. Donovan has driven down from her home in Maine, and Harleman has flown in from California.

After graduation the friends’ lives grew busy with the birth of children and eventually grandchildren, and their frequent editing sessions morphed into quarterly critiques of works-in-progress. Now they can manage to meet only once a year. Still, their trust in one another’s judgment remains constant, as do their roles. Searle describes herself as the “emotion enforcer;” Harleman says she’s the stickler for atmosphere and grammar; and Donovan is the clarity and believability police.

The collaboration has been remarkably productive. Harleman is the author of two literary novels and two volumes of short stories. She is now working on a novel about widowhood, inspired by the death of her husband in 2010. Searle has written four books of fiction and the libretto to Tonya & Nancy: The Rock Opera, which was produced by the American Repertory Theatre in Cambridge, Massachusetts, in 2011 and which may be staged in Los Angeles this year. Donovan has had a prodigious career writing for young readers, which started after she began reading to her own daughters.

After the coffee and an exchange of reminders of hand-knit sweaters that were promised but never delivered, the women get down to business. Harleman’s up first, and Donovan and Searle pull out marked-up 230–page manuscripts of Tell Me, Signora, Harleman’s novel based on the life of Italian Renaissance painter Sofonisba Anguissola and of Harleman herself.

Donovan and Searle are quick with advice: “The atmosphere eclipses the plot, which is concentrated in the last third of the novel.” “Sprinkle action in.” “Mix up the chronological order to hint at suspenseful events to come.” Fearful that playing with timing will confuse the reader, who must already contend with two interwoven stories taking place 400 years apart, Harleman resists. Splicing past and present within two distinct narratives is serious work. Not surprisingly, the stickler for atmosphere holds on longingly to the ambiance she has lovingly crafted. But now she has her colleagues’ suggestions to consider.

Next comes Searle. Her manuscript is titled We Got Him, and in it she weaves together characters from a previous unpublished novel and the true story of the manhunt for the Boston Marathon bombers. Harleman suggests Searle rein in the flashbacks. A self-proclaimed flashback addict, Searle confesses, “I even confuse myself.” Donovan is concerned that Searle’s forward-looking references give away the punch lines. “Make them hints, not explicit,” she advises.

Finally the group takes on Donovan’s middle-grade novel The Return of the Waffler, a sequel to her 2013 The Waffler. Through earlier e-mail exchanges, Searle had helped Donovan shape the story’s end, but Donovan is wrestling with the middle sections. Harleman produces a color-coded diagram she drafted with the protagonist, Monty, at the center. It gives Donovan fresh ideas for character development and narrative arc. But she’s careful to solicit just enough guidance to let the story flow. “No surprise for the writer,” she warns, “means no surprise for the reader.”

While it will be a year until they reconvene as a group, all three authors agree that they can’t write a book without one another. In the interim, they will critique manuscripts over e-mail and by phone. Writing, after all, need not be an entirely solitary pursuit.