Last week, I attended the opening of an art exhibit at the Watson Institute for International Studies. The second floor hallway was filled with colorful abstract paintings created by Professor Emeritus of History Abbott (Tom) Gleason, who taught Russian history to generations of Brown students. In May 2010, the BAM published an article in which Tom reflected on his life since being diagnosed with Parkinson’s disease. Although he no longer teaches, Tom retains a sense of energy and joy that shines through in his paintings. 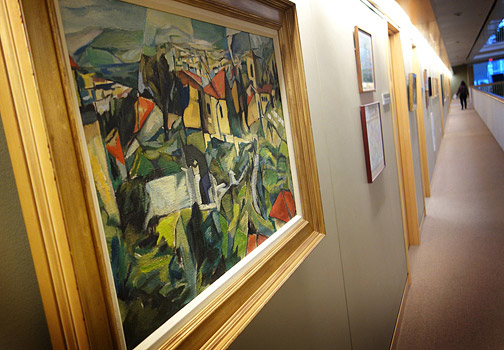 Tom’s show is the first in a new “Art at Watson” series,  one of many initiatives that are reinvigorating the Institute. Watson’s new faculty fellows program, for example, is bringing eighteen Brown faculty members from several departments to teach and conduct research there for two-year appointments. A new postdoctoral fellows program will soon be under way. Watson and its allied regional studies programs are recruiting such international policymakers as Indian Ambassador Nirupama Rao to be distinguished visiting fellows. A new Distinguished Speakers Series has already hosted Nobel Laureate Amartya Sen.

The gains at Watson reflect one simple fact: people matter. In July 2013, political scientist Richard Locke became the Howard R. Swearer Director of the Watson Institute. Rick brought a wealth of experience as the chair of the political science department at MIT and the deputy director of MIT’s Sloan School of Business. His research, focused on improving labor and environmental conditions in global supply chains, complements the strengths of existing faculty. Brown also recruited Edward Steinfeld from MIT, a prominent political scientist working on energy issues in China, who will direct Brown’s China Initiative, adding to our thriving regional programs on Brazil, India, Latin America, the Caribbean, and the Middle East. As I write, we are hiring new junior and senior faculty members who work in key areas of security and development in India, China, and the Middle East.

Through a strategic planning process completed last spring, the Watson Institute, building on existing strengths across multiple departments, has identified three areas of focus for its work:  development, security, and governance. The Institute’s development work will concentrate not only on economic development but also on political, social, and human development, and it will tie into research under way at the School of Public Health, the Warren Alpert School of Medicine, and the Population Studies and Training Center.

In security studies, the Watson Institute plans to build in the areas of cybersecurity; the intersection of environmental issues, climate change, and security; and security challenges in the Middle East, South Asia, the Far East, and Latin America.  Watson’s work on governance will center on the ability of individual nation states to extend the rule of law and deliver public goods — areas in which Watson has deep expertise. Faculty and students are working on access to medicines in the global south, governance issues around climate and development, and the role of Islamist organizations in the provision of social welfare services.

Brown benefits from a strong and energetic Watson Institute. Currently, Watson houses two popular undergraduate degree programs, one in international relations (with 135 concentrators) and the other in development studies (33 concentrators.) Faculty there lead an NSF-funded interdisciplinary graduate program in development that includes PhD candidates from anthropology, economics, political science, and sociology. As they prepare for careers in a global environment, students are drawn to Watson to learn about, discuss, and conduct research on the world’s most pressing challenges.

Brown’s strategic plan, “Building on Distinction,” identified “creating just, peaceful and prosperous societies” as one of the seven integrative themes in which we will invest in the coming years. The Watson Institute for International Studies, with its focus on innovative, policy-relevant education and scholarship, stands as one of the premier Brown centers and programs that will play a central role in bringing our efforts under this theme to fruition.