Among the fondest memories Peter Gudmundsson ’85 has of his three years as an active-duty U.S. Marine officer was the time in 1987 when, off the coast of Vietnam, he stood on the deck of a U.S. Navy ship looking up at the Soviet planes flying overhead. What was particularly memorable, he says, was not the plane flying overhead, but the reaction of the men in his platoon, who, he says, dropped their trousers and mooned the Soviets, knowing they were taking photos. 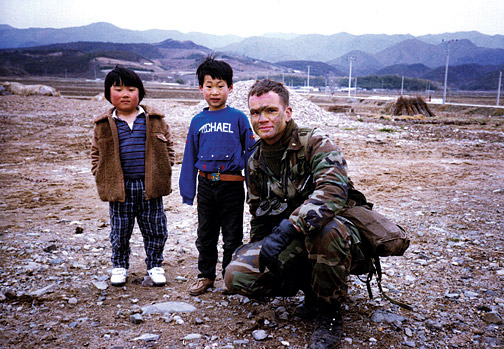 Courtesy Gary Gundmundsson
Gudmundsson left the marines in 1988 to pursue a business career. But the friendships he made stayed with him. So in April of last year he jumped at the chance to purchase RecruitMilitary, a human resources company dedicated to finding civilian employment for U.S. military personnel.

Gudmundsson estimates that, since he took over, the company has connected roughly 8,000 veterans with jobs. In all, RecruitMilitary maintains a database of about 625,000 job applicants and 1,600 potential employers around the country. It also hosts sixty-seven job fairs every year. The unemployment rate among veterans overall is slightly lower than 7.3 percent in the civilian population, but it’s higher, 10 percent, for vets of recent wars.

His major innovation, Gudmundsson says, and the key to RecruitMilitary’s success, has been his decision to turn the company’s marketing approach on its head. Instead of telling employers, “Support our troops” or “You owe it to them to hire veterans,” he pitches veterans as men and women with a unique set of skills that any company would want in an employee.

“Imagine,” he says, “if you were trying to fix a man up with a blind date, and you said first, ‘Does anyone want to date this guy?’ No, you say, ‘You have to meet my friend; he is awesome.’”

After his stint in the military, Gudmundsson earned an MBA at Harvard Business School and then went to work on mergers and acquisitions at Morgan Stanley. In 2000, at the height of the dot-com bubble, he started as the CEO of Jobs.com. The company eventually filed for bankruptcy, but Gudmundsson bounced back by buying an interior design magazine, the Dallas-Fort Worth Design Guide, and launching similar magazines in such cities as San Antonio and Austin. While seeking new ventures in 2012, he connected with an old friend from the marines, who offered to sell him RecruitMilitary.

Gudmundsson says he has also worked to change the company’s mission statement from “Changing the lives of veterans and their families” to “Helping organizations excel by attracting, appreciating and retaining America’s finest talent, our veterans.”

“If you ever fly out to an aircraft carrier and you see an F-18 catapulting off the deck,” Gudmundsson says, “you realize the young sailor that gave the go-ahead for that to happen is twenty, and a year ago he was hanging around a mall in Passaic. You realize service takes a tremendous amount of responsibility and discipline.”

Reader Responses to Beyond Altruism