Chickens, Natalie Prosin ’07 MPP vividly remembers, were the subject of her first-grade science project. After watching several chicks hatch and open their eyes, Prosin overheard her mother, who had come to pick her up from school, ask the teacher what would happen to the chickens next. The teacher implied that they would soon be someone’s dinner. “It was like, ‘Nudge-nudge, wink-wink, they’re going to be on our table next week,’” Prosin says. 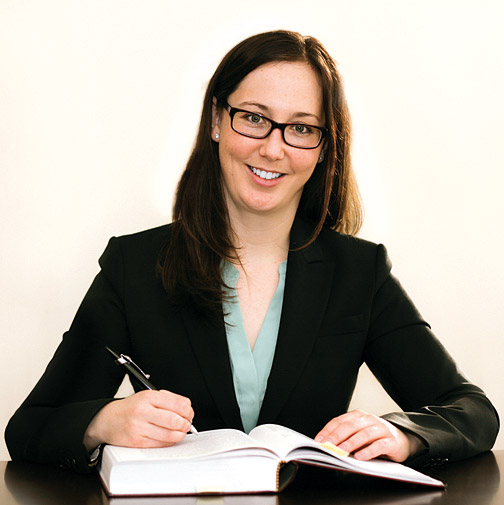 Courtesy Tatiana Mendez
It was an early lesson in the harsh reality animals face, and it has stayed with Prosin her whole life. Now the executive director of the Nonhuman Rights Project (NhRP) in Washington, D.C., she is part of a coalition of lawyers and scientists working to expand the rights of elephants, great apes, and cetaceans (such as whales and dolphins).

But they’re starting with chimpanzees. In suits filed in three New York county courts in December, the NhRP argues that chimps should enjoy some of the same basic rights as humans. The animals wouldn’t be allowed to vote of course, but instead would possess the status of “personhood,” which ascribes an entity some measure of rights and duties, in this case the right to bodily liberty.

At Brown, Prosin earned a master’s in public policy, focusing, she says, on “how to apply the theoretical in a practical way.” Her class on environmental policy and practice, taught by senior lecturer Caroline Karp, was her first introduction to the role the law and courts play in bringing about social change.

“We actually used a law school textbook,” Prosin says. “That opened my eyes to the possibility of solving very complex problems through the legal process.” By then Prosin had a pretty clear idea of where her passion lay. She remembers introducing herself to a graduate-level course by saying, “I’m Natalie Prosin, and I love animals.” After graduating, Prosin earned a law degree at Boston College.

Prosin was first introduced to the animal rights legal movement when she met NhRP president Steven Wise, who was preparing a flurry of targeted lawsuits seeking new rights for animals. This appealed to Prosin’s putting “theory into practice” perspective. The decision to start with chimpanzees was due to the animals’ autonomy, self-consciousness, and, says Prosin, “a host of other qualities that judges in the past have found sufficient to give legal rights to other beings.”

The December lawsuits soon failed in the lower courts, as the team expected, so now all three cases (involving a total of four “captive” New York–based chimpanzees) will head to the New York Appellate Courts. The case will most likely wind up with the Court of Appeals. If any of the cases wins, the chimpanzee will be freed and transferred to one of the refuges in the North American Primate Sanctuary Alliance.

Prosin will soon be featured in a documentary about the NhRP filmed by the husband and wife team of documentarians D.A. Pennebaker and Chris Hegedus. The pair is known for 1993’s The War Room, about Bill Clinton’s first presidential campaign, and Pennebaker won a Lifetime Achievement Oscar in 2012 for developing the cinema verité approach.