Molecular and cell biologist Kenneth R. Miller ’70 joked wryly this spring that he knows one thing about his obituary: it will mention Kitzmiller v. Dover. That’s the infamous case in which Miller, who coauthored the high school biology textbook that’s used in all fifty states, testified that intelligent design is a religious, not scientific, theory that has no place being taught alongside evolution. 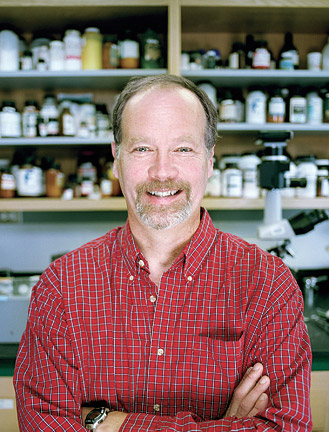 Joshua Dalismer
Cell biologist and evolution defender Kenneth Miller '70 is the first scientist to receive the Laetare Award in half a century.
A more recent addition to Miller’s obit will undoubtedly be his selection to receive Notre Dame’s Laetare Medal, which the university describes as “the oldest and most prestigious honor given to American Catholics.” First handed out in 1883, the award takes its name from the Latin word laetare, which means “rejoice,” and is announced on Laetare Sunday, the fourth Sunday in Lent. Recipients have included such influential Catholics as President John F. Kennedy, Catholic Worker founder Dorothy Day, novelist Walker Percy, and jazz giant Dave Brubeck.

“It almost always goes to public figures, social activists,” says Miller. “I looked it up online, and I had to go back to the early 1960s to find a scientist.”

As a researcher Miller studies cell membranes. But outside the lab he has a second career defending evolution against those who consider it atheistic and anti-Christian. That avocation was born when a Christian student group asked him to debate creationist Henry Morris at Brown in 1981. The event drew 1,600 to Meehan Auditorium and lasted three hours; the next day Providence Journal and Boston Globe reporters declared Miller triumphant. Since then he has appeared everywhere from C-SPAN to The Colbert Report debating proponents of intelligent design and creationism, and he has written two popular books on the subject, Finding Darwin’s God and Only a Theory.

Announcing Miller’s selection, Notre Dame’s president, Rev. John I. Jenkins, CSC, praised his “eloquent and incisive witness to both scientific acumen and religious belief. As an accomplished biologist and an articulate believer, he pursues two distinct but harmonious vocations and illustrates how science and faith can mutually flourish.”

“I don’t regard this so much as an individual honor,” Miller said, “but as a statement Notre Dame wanted to make that we—and they are speaking for the Catholic Church—are at peace with what modern science tells us about the origins of living things and also about the origins of human beings.”

Miller will receive the honor in Notre Dame Stadium in the middle of the campus. “They’ll throw a robe on me, and the commencement speaker will speak. Then I will speak. It will be fun,” he said with a grin. “My speech will be shorter.”

Reader Responses to Science and Faith