David Grabiner ’05, ’08 ScM has what many baseball fans would consider a dream job. As baseball operations analyst in the quantitative department of the New York Yankees, he takes vast amounts of data and pulls out conclusions that everyone from scouts to managers can use. 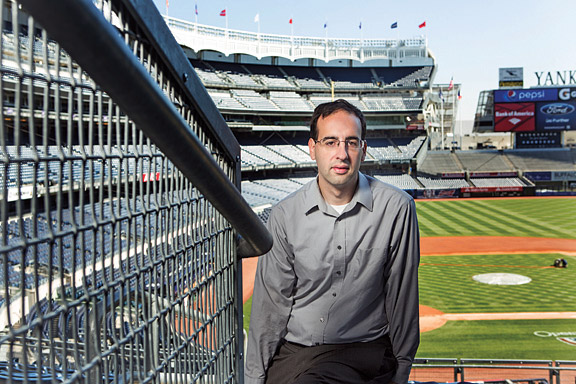 Dustin Fenstermacher
"There is this notion in the media," David Grabiner says, "that there is a conflict between statistics and scouting. It is really the opposite."
“I spend my day with a list of research topics and this huge amount of data,” he says, “and I try to find the answers in that data.” Many analysts must wait a long time to see their work turned into action, but, Grabiner says, “The thing I like about working for a baseball team is that what I discover can be used right away.”

A typical problem may involve evaluating a player’s defense. Like most major league teams, the Yankees have a large database that contains play-by-play data and, in many cases, pitch-by-pitch data for professional baseball at every level, in some cases all the way down into NCAA and college summer leagues.

“We know the locations of pitches, the speed, and the movement,” says Grabiner. “Using all of these data sources, and scouting reports as well, we try to do the best we can to predict how players will perform in the future.”

The research that Grabiner conducts is used in on-field strategy, player acquisition, player evaluation, and advance scouting: “The manager, for example, can pull up reports based on work that we’ve done to help him should he need those tools for in-game situations,” he says.

Thanks to books like Moneyball, Grabiner says, “There is this notion in the media that there is a conflict between statistics and scouting. It is really the opposite. Everyone is working together to try to get the player right.” The biggest advantage teams have over fans is that teams have so many different sources of data, not all of it quantitative.

“If you can effectively tie them together,” Grabiner says, “you can get better answers than you’d get just looking at stats alone.” (The Yankees allowed Grabiner to talk to the BAM on the condition that he not reveal data for specific players or teams.)

Even though neither of his parents was a sports fan, Grabiner started following baseball when he was eight. Even at a young age he had a passion for both numbers and baseball; he would create new statistics by adding up different statistics in the Baseball Weeklys that his mother purchased for him.

“It bothered me that there was no one stat that said how good everyone was, so I just added up their batting average, home runs, RBIs, runs, and stolen bases because that’s all I knew how to do,” he says.

Grabiner’s mother, Linda Grabiner ’69, graduated with a degree in applied mathematics, and Grabiner followed in her footsteps. As an undergraduate he had a double concentration in applied math and computer science and later earned his master’s degree in computer science. “I got a great education there,” he says of Brown. “I was well prepared for this, maybe in ways that people at other schools wouldn’t have been.”

After graduating, Grabiner accepted a job with MIT’s Lincoln Laboratory, but in the fall of 2005 he responded to a job posting for a computer programmer with the Yankees. Michael Fishman, the director of quantitative analysis for the Yankees, then contacted him, and although the opening didn’t quite match Grabiner’s skills, Fishman urged him to keep in touch. Over the next three years, Grabiner called Fishman every few months, and in January 2009, after Grabiner had earned his master’s degree and was working for a software company, Fishman offered him an internship.

Reader Responses to The Quantitative Fan