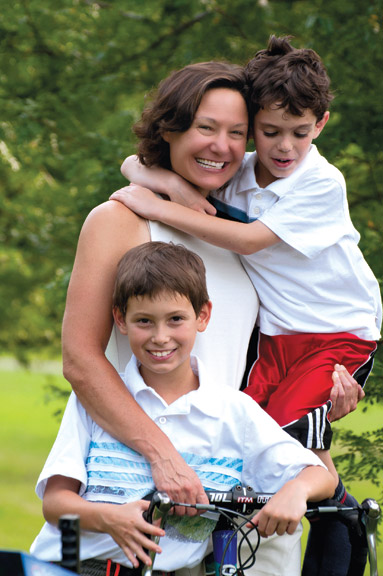 “My mom grew up on a farm in Ireland,” Wilder says, “and she would tell us stories about riding to and from school on a one-gear bicycle, fourteen miles each way. If we ever missed the bus, my mother would tell us that story and say, ‘Ride your bike.’”

Wilder is still riding her bike. A former professional cyclist and a two-time national champion, Wilder, a sports psychologist, is a “mental training coach” who helps individuals and teams excel at sports. For example, a few years ago she wrote a twenty-four-page booklet titled “Tour de You,” which tries to help parents guide their children in developing a winning, yet balanced, attitude about sports.

“I was looking for something to tell my boys: ‘Jack, Tom, do your best,’” Wilder told the Chicago Tribune three years ago. “‘It’s not about the outcome; do your best.’ They’d come back, ‘I want to win.’ I kept hearing that over and over.”

The key, she says, is to help children develop self-confidence while still maintaining a broader perspective. “It’s a fine line. We don’t want our child walking around, talking about how good they are, how they’re better than other athletes. There’s a difference between being self-confident and being cocky.”

Wilder comes across her coaching advice through long experience. As a child riding her bicycle around her neighborhood in the Boston suburb of Weston, she would often drop in at the house of Boston Celtic player and coach M.L. Carr, who became a mentor. (Robert Parish also lived in the neighborhood.) The youngest of six children, K.C. competed against her older siblings in a variety of sports: she ran, skied, and played tennis, soccer, and field hockey. She still believes that children should be discouraged from concentrating on one sport too early.

“In 1985, Brown was the school,” Wilder says. “I loved Brown because of that notion that appealed to me of independence and freedom, and of being able to make my own choices.”

As an organizational behavior and management concentrator, Wilder pursued an independent study with Professor Barrett Hazeltine. “He was fantastic,” she says. “I had a meeting with him and said I was interested in doing an independent study and riding my bicycle across America. He got very excited and said, ‘Do it.’”

“She had a very clear sense of what she wanted to learn and made what was really an audacious plan seem quite reasonable,” Hazeltine recalls. Wilder led ten people from several different countries on a ride from Williamsburg, Virginia, to Astoria, Oregon. The trip gave her an opportunity to study group dynamics and cohesiveness.

“What I remember most,” Hazeltine says, “is her upbeat manner, her cheerfulness, her enthusiasm—probably why the project looked viable. She had a sensitivity to people and a thoughtfulness about how to support others that was remarkable. At the time I think I was more struck by the person than the project, although I realize the depth of her accomplishment.”

While at Brown, Wilder was a tricaptain on the field hockey team and one of only two women on the club cycling team. She also started a triathlon team. Wilder qualified for collegiate nationals in the triathlon in Hilton Head, S.C., but couldn’t attend after she was struck by a car while training on her bike in Providence.

Wilder went on to grad school at the University of Virginia to study sports psychology, still riding her bike around campus. When a classmate approached her and asked if she wanted to join the cycling team, Wilder agreed to enter a race, which she won.

“Obviously, they wanted me to continue,” she says.

Wilder went on to become the Atlantic Coast Conference cycling champion that fall, and the following spring she went to the nationals and became a collegiate All-American. After school, she launched a career as a professional cyclist, earning a top-twenty ranking and winning several races. Later, as a masters athlete, she won two short-track-cycling national championships.

The lessons learned have been invaluable to her practice as a sports psychologist. The key has been earning elite status while learning patience and resilience, as well as achieving a life balance. These days, she says, her focus is on balancing her roles as a wife, a mother, and a professional.

“A support system is very important,” Wilder says. “My parents were amazing on every level, because they let me make my own choices, and they let me find what I love to do. They still reinforced and imparted their values, so, even though I loved to ride my bike, what was more important was education.”

That education has allowed her both to flourish as an athlete and to help others become high-achieving and happy participants in sports. “It is not about me,” Wilder says. “It is about imparting my knowledge to others. Sport shouldn’t ever be a selfish pursuit.”