Before such specialties as cytology and genetics brought natural history into the lab, scientists ventured into the field collecting specimens, which they preserved in museums for further study. Brown once had such a museum, the Jenks Museum of Natural History and Anthropology, in Rhode Island Hall. Now an exhibit there called “The Lost Museum” imagines what it was like. 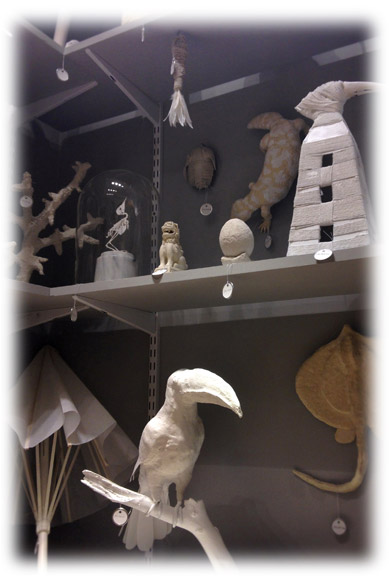 Its curator and founder, John Whipple Potter Jenks, class of 1838, ran the museum from its opening in 1871 until 1894, when he collapsed and died on the steps of the building, presumably from the arsenic he used to mount his animal specimens. A banner in the exhibition describes him as a “Martyr to Science.”

Jenks traveled the world gathering specimens for museums. The exhibition contains a diorama of his artifact-packed office, based on “The Bed in the Museum,” an article his student Dallas Lore Sharp, class of 1895, published in the Atlantic Monthly. Tellingly, on Jenks’s desk is a Bible, and down on the floor under a chamber pot is book by Charles Darwin.

For Jenks, the goal of comparative anatomy was to understand the logic of God’s creation. “The idea was that you need collections to teach students,” Assistant Professor of History Lucas Reippel said at a Commencement forum titled “Finding Brown’s Lost Museum.” At the time of Jenks’s death, “natural history was seen as fuddy-duddy,” Reippel said, and so Jenks’s colleague and former student Hermon Carey Bumpus turned the space into dissecting labs, according to Steven Lubar, an American studies professor and faculty adviser to the project. Brown closed the museum in 1915, boxed up the contents, and thirty years later all those carefully mounted animals were hauled to the Brown dump.

The poignancy of Jenks’s story captured the imaginations of students in the public humanities program, which Lubar directs. With three RISD students they formed The Jenks Society for Lost Museums, which researched and planned the current exhibition. Scouring local museums and Brown offices, students located a few hundred items from the original museum that are now in a display case arranged according to their degree of decay. Metal weapons survive intact, as do, amazingly, bird eggs and even taxidermic bird specimens. On their way to oblivion, though, are the tattered fragments of Jenks’s hand-written identification tags.

Perhaps the eeriest part of the exhibition is a storage closet in which artist Mark Dion “conjures the ghosts of the museum,” as Lubar put it (photo, at right). Sixty artists recreated items Jenks had collected—from the tooth of a mammoth to a plumed peacock. Given the theme of the exhibition, it’s hard not to envision them decaying in a landfill someday.

More on the Jenks Museum here.