During night shifts as a janitor at a Baltimore Procter & Gamble plant in the 1980s, Afaa Michael Weaver ’87 AM wrote poetry, but no one took him seriously. “My coworkers and family thought I was crazy,” he says. “‘Oh, there’s Michael over there, doing his scribbling,’ they’d say. But I kept on writing.” 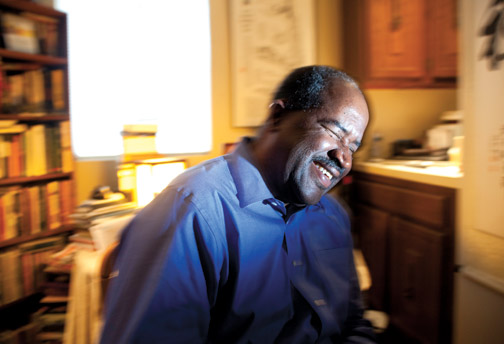 Mark Ostow
Afaa Michael Weaver writes poetry at home in Somerville, Massachusetts. Before entering Brown's master's program, he wrote during night shifts as a factory janitor.
That was thirty years ago. This spring Weaver won the $100,000 Kingsley Tufts Award—the world’s largest monetary prize for a single collection of poetry—for his twelfth book, The Government of Nature. In this, as in all his work, Weaver chronicles his own inner and outer life, and the often unseen experiences of everyday Americans. He “finds a place in the legacy of Whitman,” writes critic Arnold Rampersad, describing Weaver as “a poet of genuine depth” with a vision “as wide as the horizon itself.”

Born in 1951 to a working class African American family, Weaver was the first in his family to attend college, entering the University of Maryland at the age of sixteen. But after his wife became pregnant he dropped out of college, got a job at U.S. Steel, and joined the military reserves, an experience he found traumatic. Weaver’s son was born with Down syndrome and a missing heart valve. Ten months later he died. And almost a year to the day after his son’s death, Weaver suffered a mental breakdown that landed him in one of the worst state hospitals in the country.

He spent the next years on and off antipsychotic medications while working the factory floor at Procter & Gamble. By the time he was thirty-four he’d been promoted to janitor, and his family assumed he would keep working there for the rest of his life. But by then he was writing poetry and having it published in local magazines. He applied to Brown’s master’s program and told just one person, a coworker, about it. The coworker laughed. To his surprise, Weaver was accepted. That same year he won a fellowship from the National Endowment for the Arts, and his first book of poems was selected for publication.

Weaver left Baltimore for the first time to attend Brown. “It was a climactic moment,” he says. “I was at an intersection, simultaneously in two worlds. On the one hand I was feeling overqualified, but on the other hand I was feeling thoroughly outclassed. After fifteen years in the factory, Brown was a colossal class, culture, and race shock.”

In graduate school he worked briefly with the poet and literary arts professor Michael Harper before taking up playwriting, which he studied with Paula Vogel and the late George Houston Bass, who became a mentor. By the time Weaver earned his Master of Arts in creative writing in 1987, he says, “I hated to leave Brown.”

He went on to teach at NYU, Rutgers, and Simmons, where he now holds the Alumnae Endowed Chair. In addition to a dozen books of poetry, he has published several plays. And he adopted the name a Nigerian poet gave him: “Afaa,” which means “the Oracle” in Ibu.

While his writing career flourished, Weaver continued to face personal difficulties: the dissolution of his marriage, the problems his second son experienced growing up in the inner city, and his own heart failure and triple bypass surgery, from which Weaver used tai chi to recover. He also began to practice Daoism, study the Chinese language, and spend time in China.

All this helped him define who he really is as part of an economically and racially divided U.S. culture and as a spiritual being. He brings this insight to his poetry.

I fold my wings in rituals no one can see,
Pack them into the vinyl grocery bag
From the supermarket to save trees,

he writes in The Government of Nature. The book is the second volume in a trilogy that brings together Weaver’s Daoist practice, the revelation of his sexual abuse as a child, and his healing in poetry that is at once bold and delicate and that asks us to challenge the nature of identity. The third volume, City of Eternal Spring, is scheduled for publication in the fall.

“My poetry comes from a clearer space inside me now,” Weaver says. “The journey to that space is along a route I take each day in Daoist sitting meditation, the point of which is to realize and be with one’s true nature.”

Reader Responses to The Oracle