Autism Breakthrough: The Groundbreaking Method That Has Helped Families All Over the World by Raun K. Kaufman ’95 (St. Martin’s). 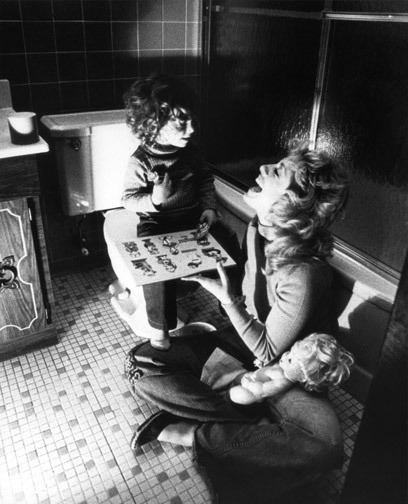 Courtesy Raun Kaufman
As a toddler, Kaufman felt safest in the tiny bathroom, so that's where his mother played with him.

When he was eighteen months old, Raun Kaufman ’95 received a life sentence. Specialists told his parents that their severely autistic son, who was nonverbal and had failed to develop the mental and physical skills of other infants his age, would require eventual institutionalization. Perhaps one day he might eat with silverware or dress himself, but don’t expect more, the doctors told them: your child will never go to college, never fall in love, never have a career.

Twenty years later, Kaufman graduated from Brown with a degree in biomedical ethics.

How could this be? “My parents looked at me and saw possibilities, not deficiencies,” Kaufman writes in Autism Breakthrough. Barry and Samahria Kaufman closely observed their son, scribbling notes and photographing his habits. For people with autism, a living room can feel like Grand Central Station, so they began to work with him in a small bathroom, a sort of sensory deprivation tank.

In autism, the part of the brain that organizes sensory input doesn’t function properly. People with the disorder often use repetitive motions to help them tune out excessive stimuli. As a toddler Kaufman would spin a plate on its edge for hours, and his mother responded by doing the same thing. Eventually he began to make eye contact and smile at her. By age five he had fully emerged from the disorder and was considered the first child to do so. His parents developed their approach into a program they named Son-Rise, which is now taught at their Berkshires-based nonprofit, the Autism Treatment Center of America, where Kaufman is director of global education.

Autism Breakthrough: The Groundbreaking Method That Has Helped Families All Over the World suggests a seismic shift in treating autism as a social-relational disorder instead of a behavioral disorder. “Parents shouldn’t ask what they should do in order to change their child’s behavior,” Kaufman says. “They should focus on what must happen in order to create a relationship with their child. Conventional behavior modification treatment creates robotic behavior and turns social interaction into broccoli, a loathed vegetable that the child must eat before she can have dessert.”

Laced with anecdotes and exercises, his book guides parents and practitioners on topics ranging from diet and brain development to tantrum management. “The idea is to create a relationship with the child where they want to connect,” Kaufman said in an interview this spring. “When you stop them from what they most want to do (their self-stimulating behaviors), you alienate them.”

Once a bond gels, parents can use the child’s motivation to teach new skills based on his interests: “The children show us the way in, and we show them the way out.”

Reader Responses to The Way Out